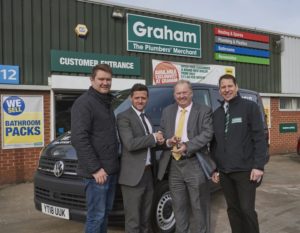 W Wright Electrical & Mechanical, based in Sheffield, was randomly drawn from the many qualifying customers who had purchased a Boiler Replacement Pack, which made the company eligible to enter the prize draw.

“Now we’ve received the prize, it feels great to win all over again,” said Bill Wright, Managing Director of W Wright Electrical & Mechanical. “Winning this competition saves us the cost of buying a brand-new van, which is brilliant.

“We chose a metallic grey colour, which looks very sophisticated. Unfortunately I won’t be the one driving it but I’m sure the person who does will enjoy it very much.”

Industrial and commercial contractor, W Wright Electrical & Mechanical has been running since 1978 and provides fully integrated electrical and mechanical solutions throughout the concept to commissioning stages.

Steve Leeder, the Area Director of East Coast, Lincolnshire and South Yorkshire at Graham Plumbers’ Merchant was delighted with the successful outcome of the competition, “The response to the Win a Van competition has been fantastic. We are thrilled to award W Wright Electrical & Mechanical with their prize. Hopefully the van will be a great asset to their business.”

I'm the Assistant Editor on BMJ. If you have any product or people information, or some news you'd like to share, please feel free to email me.
Previous Woodpecker Flooring’s new nest
Next Construction Output Forecast to Flatline in 2018