White knight roofer races to the rescue of pensioner

Josh Morrison, of JR Roofing in Blackpool Lancashire, has done his bit to uphold the reputation of roofers, despite the best efforts of cowboys and conmen.

Morrison stepped in when he heard of a pensioner who had been fleeced and then intimidated by cowboys who had stripped her roof and then left it unsafe and unfinished. 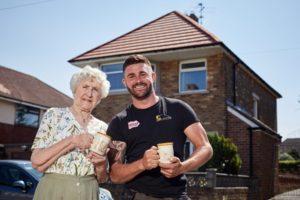 Joan Woodhouse, 84, handed out £1,150 to the cowboys as a deposit for the works to be carried out on her home, a two-storey house in Ingleway Avenue.

“I surveyed the property and I was disgusted. On one side they’d put in felt and battens but the felt was ripped and, because they hadn’t put up scaffolding, they hadn’t even touched the other side and they had just thrown the rubbish into the garden,” he says. “The guttering and the down pipes were smashed, and they’d stacked the old broken tiles right over the front door. A gust of wind and they’d have been over.”

Determined to drop everything to make Joan’s house safe and watertight, Josh juggled his commitments so that she could jump the queue – a task made easier by the extended spell of dry weather. After stripping off the felt and putting in new battens he installed Redland Mini Stonewolds, ridge, hip end caps and dry ridge.

Woodhouse and her family are duly grateful and impressed with Morrison’s professionalism. “I was very nervous at the start because an experience like this makes you very wary of any tradesman, but Josh and his lads were very good,” she says.

Nigel, Joan’s son, is unwilling to name the company at fault after receiving threats both verbally and by text. “I did just w 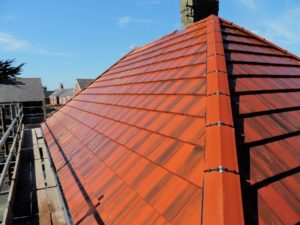 hat the Consumer Advice Bureau told me to do and gave them six days to finish the job properly however they ignored me and then turned up on the sixth day and threatened to put rubbish in my mum’s garden if we didn’t pay up.”

He has since reported the firm to both the police and the trading standards authorities, but he remains shaken. “They were very intimidating, both to me and my mum, so we’re both a bit traumatised and just want to put this behind us,” he says. 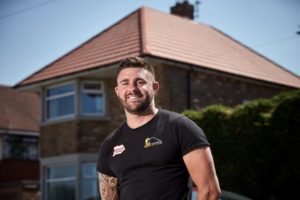 “I’m no roofer but I’m not an idiot and when I saw the state of the roof I was shocked at how poor it was. Josh has been very professional, shared references that I could take up and showed that he was a member of the trade body, the Confederation of Roofing Contractors.”

I'm the Assistant Editor on BMJ. If you have any product or people information, or some news you'd like to share, please feel free to email me.
Previous Selco Backs UK Blockbuster ‘King Of Thieves’
Next Building the Dream Home with Black Millwork