In the highly competitive sphere of attracting charitable donations, many different ways of collecting money have been dreamt up. These have included; Ice Bucket Challenges, Ugly Jumper Parties, Balloon Pops as well as the more mainstream events such as Sponsored Runs, Bake Stands etc.

However a leading hirer of temporary welfare units has decided upon a unique way of raising much needed funds for their chosen charities.

Mel Gould, the National Sales Director for the welfare unit rental specialists, Welfare 4 Hire explained, “The charity, ‘Live Life Give Life’, is one very much close to my heart. When I learned that they were in need of urgent funds to maintain their good work, I approached our managin 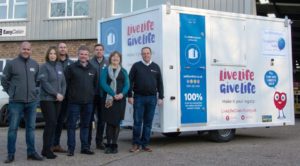 g director, Marc Prince, to see if we could aid them in any way.”

“Marc was keen to help and consequently we put our heads together to see if we could come up with a solution that would not only raise money for ‘Live Life Give Life’ but to also to raise the profile of this important charity. During our discussions we decided that ‘Live Life Give Life’ would be our principal charity, but we also thought it right to help other charities throughout our area of operations,” continued Mel.

Welfare 4 Hire had recently placed an order for forty mobile welfare units from the leading manufacturer, AJC EasyCabin. This would bring their total mobile welfare unit fleet up to a milestone two hundred units.  This became the catalyst to begin their charitable work.

Gould and Prince came up with the idea that Welfare 4 Hire would donate all of the hire revenue from the 200th unit to charity. AJC EasyCabin was very keen to be part of this arrangement and agreed to design a special livery that brought out the vibrancy of the ‘Live Life Give Life’ logo. In addition, each year, an extra charity will be chosen alongside ‘Live Life Give Life’ and the hire charges will be evenly distributed between the two charities. For 2019, the company has chosen the children’s cancer charity, ‘Christopher’s Smile’.

With an expected life of up to ten years the Welfare 4 Hire/AJC EasyCabin welfare unit could raise as much as £50,000, of which 100% will be given to two charities.

Mandy Venters, Chairman of Live Life Give Life added, “Live Life Give Life is delighted to be amongst those charities chosen by Welfare4Hire for their 200th cabin. As a small charity, founded in 2008 to raise awareness of organ donation and encourage people to register as organ donors, Live Life Give Life also believes it is important for everyone to have the conversation about organ donation with their families and friends so that their wishes are known.  Those groups are responsible for the final decision about donating a loved one’s organs; to date 43% refuse, having been unaware of those wishes.  This is important to Live Life Give Life as all of the charity’s volunteers have a direct affiliation with organ donation.  Any funds received are put towards awareness campaigns, events and activities, in addition to funding initiatives to improve the welfare of patients awaiting transplants and supporting the public recognition of donors and their families”.

“Live Life Give Life would like to wish Welfare-4Hire’s 200th cabin successful trips around the UK.  It is hoped that everyone will now think about making organ donation a part of their family’s and friends’ future legacy.”

Welfare 4 Hire rent a wide range of HSE compliant welfare units and temporary accommodation from four depots; London, Midlands, Manchester and Gloucester. They were established in 2010 and grown into one of the leading hirers of welfare provisions for construction and events.

Luton based, AJC EasyCabin has recently been awarded a Green Apple Environment Award in an international campaign to find the greenest companies, councils and communities. They are one of the largest manufacturers of temporary accommodation units in the UK.

I'm the Assistant Editor on BMJ. If you have any product or people information, or some news you'd like to share, please feel free to email me.
Previous Chould the construction industry be drugs testing?
Next Plumb Inn joins the vital search for missing children across the country