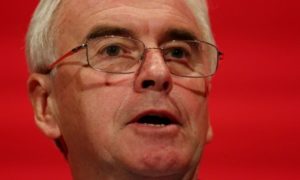 “Don’t worry, we want to protect and safeguard investment in renewable energy and green infrastructure to help insulate homes and fit solar panels” was the message from John McDonnell MP to the Builders Merchants’ Federation (BMF) yesterday.

The Shadow Chancellor was answering a question from Brett Amphlett, who represented the BMF at a major Labour Party event near Trafalgar Square in London. Mr McDonnell gave a keynote televised speech to set out his Party’s key demands from the Autumn Budget next week.

The BMF wants politicians to understand that leaving the EU throws in question the future of Value-Added Tax because it is a European tax. News is awaited on whether a replacement purchase tax is being hatched by the Treasury and HMRC if the UK leaves on a ‘no deal’ basis.

Brett Amphlett, BMF Policy and Public Affairs’ Manager, asked John McDonnell MP if Labour will fight to retain or revamp existing categories of reduced VAT on the supply and professional installation of energy-efficient and water-saving materials. He said yes – for home energy efficiency and for female sanitary products – and Labour will want to talk to the BMF in due course.

The Shadow Chancellor added that Labour believes in clean energy and cited a 95% decline in renewables in recent years due to cuts in government subsidies to transform the market. His Shadow Cabinet colleague, Rebecca Long Bailey MP, was onstage with Mr McDonnell. She leads Labour’s efforts for a change in business rates applicable to solar panels on commercial buildings. This is widely seen as a major factor for corporate businesses in deciding on rooftop solar PV.

The speech took place at the Institution of Engineering and Technology in front of an invited audience of business representatives and journalists from the national print & broadcast media.

Since June 2012, the BMF has lobbied to keep 5% VAT on energy-saving materials defined in eleven product categories under EU law. On several occasions, Mr Amphlett has raised it in person with senior politicians – including the Prime Minister, the Financial Secretary to the Treasury, the minister with day-to-day responsibility for VAT, and the leadership of both the Labour Party and the Liberal Democrats.

I'm the Assistant Editor on BMJ. If you have any product or people information, or some news you'd like to share, please feel free to email me.
Previous Aico’s website gets a makeover
Next Join the #LoveLakesIsland campaign