The UK construction sector has suffered its sharpest decline since April 2009, according to new figures.

The latest Construction Purchasing Managers Index (PMI) compiled by IHS Markit/CIPS read shows that business activity and new work in all areas fell at the fastest pace in 10 years. Housebuilding reported its largest decline for three years, civils contracted at its fastest rate since October 2009, while commercial work was hit hardest, falling for the sixth month in a row. 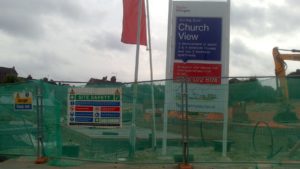 The index read 43.1, well below the 50.0 threshold between expansion and contraction, and down sharply from the 48.6 recorded in May.

He added: “Greater risk aversion has now spread to the residential building sub-sector, as concerns about the near-term demand outlook contributed to a reduction in housing activity for the first time in 17 months.”

Chartered Institute of Procurement and Supply (CIPS) group director Duncan Brock said: “Purchasing activity and new orders dropped like a stone in June as the UK construction sector experienced its worst month for a decade.

“This abrupt change in the sector’s ability to ride the highs and lows of political uncertainty shows the impact has finally taken its toll as new orders dried up and larger contracts were delayed again. The pain of Brexit indecision was felt across all three sub-sectors but the previously resilient housing sector suffered the fastest drop in three years which is frankly worrying news.

“However, we are still a long way off the level of entrenchment seen in the last economic crisis, as payroll numbers remained relatively steady as any job cuts were just delays in replacing staff. But with the onslaught of indecision combined with a weakening global economy, this could easily turn into more months of contraction as future optimism remains subdued. “