Growth in construction work in January eased to its weakest for ten months, according to the IHS Markit / CIPS UK Construction PMI®. 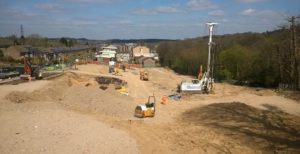 New orders increased only marginally at the start of 2019, which contributed to the slowest expansion of employment numbers for two-and-a-half years.

Uncertainty over what will happen post-Brexit is cited by a number of survey respondents as factor, as is a corresponding slowdown in progress on new projects as well as associated concerns about the domestic economic outlook. The headline seasonally adjusted IHS Markit/CIPS UK Construction Total Activity Index dropped to 50.6 in January, from 52.8 in December. The index has posted above 50.0 in each month since the snow-related decline seen in March 2018; below 50 indicates that things are getting worse.

All three categories of construction output recorded weaker trends than in December. Residential work was the strongest performing area, although growing at the slowest rate since March 2018. Civil engineering activity increased marginally, with the rate of growth much softer than December’s 19-month high. Commercial work was the weakest performing area of construction output in January. Latest data indicated a decline in work on commercial construction projects for the first time in ten months.

The latest survey pointed to the slowest rise in employment numbers since July 2016. Meanwhile, slower growth of input buying helped to reduce pressure on construction supply chains in January. The latest deterioration in vendor performance was the joint-weakest since September 2016. Construction firms also pointed to the smallest reduction in sub-contractor availability for two-and-a-half years. Around 41% of the survey panel anticipate a rise in output in 2019, while only 16% forecast a fall. However, the resulting index signalled a moderation in optimism since December.

Tim Moore, Economics Associate Director at IHS Markit, which compiles the survey said: “UK construction growth shifted down a gear at the start of 2019, with weaker conditions signalled across all three main categories of activity. Commercial work declined for the first time in ten months as concerns about the domestic economic outlook continued to hold back activity. The latest survey also revealed a loss of momentum for house building and civil engineering, although these areas of the construction sector at least remained on a modest growth path.”

Duncan Brock, Group Director at the Chartered Institute of Procurement & Supply added: “The sector suffered a sharp drop in output growth in January, and the softest rise in purchasing volumes since September 2017, as Brexit continues to hamper progress and dampen client confidence.

“Residential building, the stalwart of the sector leading the way in the last six months, lost its momentum with the weakest performance since March 2018. However, commercial building suffered the most of the three subsectors declining for the first time in just under a year. Larger orders were held back by clients and overall activity slowed.

“The biggest shock came in the form of job creation which has managed to suffer the slings and arrows of Brexit highs and lows with solid hiring since the referendum result. Employment rose at the slowest rate since July 2016 and with optimism also in short supply, the sector only