Truck and Marine Cranes Limited the Staffordshire based manufacturer of truck and marine cranes have just completed two projects both utilising a Hatz 4L41C diesel engine. 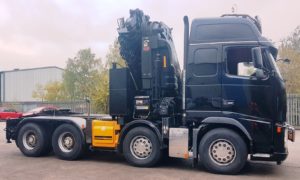 These projects were entirely driven by requests from customers requiring a bespoke solution to their individual lifting requirements.

The first task entailed the design and development of an independently operating crane fitted to a Volvo truck. The client required the crane to operate without having to start the trucks’ engine and therefore a separate power source was a prerequisite. Truck and Marine Cranes engineers manufactured and designed bespoke fuel and oil tanks to enable the crane to operate at all times. The Hatz 4L41C engine was selected principally because of its built-in sound attenuated encapsulation.

The work from enquiry to final installation was completed inside three months.

The second assignment was a design and manufacture of a floating pontoon with a crane positioned in the middle of the pontoon. The crane was also powered by a Hatz 4L41C engine.

Andy Young from Truck and Marine Cranes explained,” We structurally reinforced the pontoon and put the engine in its own skid with a fuel tank. The pontoons are of modular design, so when the crane pontoon is surrounded by eight others it becomes the centre part of a nine pontoon system; and it all floats.” 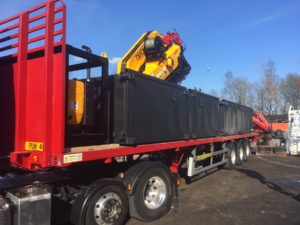 The complete design and build of this project was carried out in around five months.

Andy continued, “We use the Hatz 4L41C engine because of the low noise whilst running and also the fuel consumption is reasonable at the revs we set them at. We have used Hatz for many years and know they have a history of good reliability.”

Truck and Marine Cranes Limited specialises in the sales and manufacture of truck and marine cranes. They also supply quality used commercial vehicles with chassis modifications and bespoke truck bodies. They are based in Cheadle, east of Stoke on Trent.

Hatz diesel engines have been around since 1910. From their manufacturing base situated at Ruhstorf, Germany, Hatz produce a range of modern diesel engines from 3 to 55 kW. Their UK subsidiary, Hatz GB Limited, has its facilities centrally located in Hinckley, Leicestershire.

I'm the Assistant Editor on BMJ. If you have any product or people information, or some news you'd like to share, please feel free to email me.
Previous NEW REXEL SPECIALIST LIGHTING CATALOGUE
Next Lords to debate report on off-site manufacture for construction