Mike Peace, who was based at Toolbank’s Cleckheaton branch and clocked up a huge number of miles delivering to customers throughout Yorkshire and Lancashire, retired last month.

Mike joined Toolbank on August 14 in 1978 as a driver and has remained committed to this role at the company for more than 39 years.

Northern regional director Mark Mulholland explained that Mike logged every company mile he has ever driven during his time with Toolbank – even logging the mileage covered in every vehicle he has driven.

Mike has said he will spend his retirement riding his new battery-powered bike and spending time with family, including his wife, who has suffered from ill health recently, and his 13 grandchildren. .

During a presentation to Mike on his retirement day at the end of March, Mark Mulholland, whose father Alex employed Mike when he opened the branch in 1978 said: “We would all like to wish Mike the very best for his retirement and thank him for all his hard work and dedication over the past 39-plus years.” 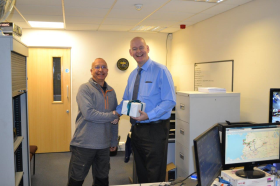 I'm the Assistant Editor on BMJ. If you have any product or people information, or some news you'd like to share, please feel free to email me.
Previous Boiler Plus: “A Welcome Dose of Common Sense” in the quest for heating efficiency
Next Grenfell Tower cladding standards slip flagged in 2014 Landscaping supplier Talasey Group has made two important appointments to the senior management team, to …