The Underfloor Heating Store comes out on top

The Underfloor Heating Store, the biggest online retailer of electric and water underfloor heating systems in the UK, has been named as the Santander Growing Business of the Year at the prestigious Amazon Growing Business Awards in London.

The company, which was a finalist in 2017, beat off tough competition from household brands including Love Energy Savings and Brewhouse & Kitchen to take the coveted award in the smaller company category (£10m – £25m turnover). Recognised for its strong financial performance and innovation in the market, The Underfloor Heating Store impressed judges with its positive impact and undeniable customer engagement, “From its origins in a garden shed, the underfloor heating store has remained true to its vision of making it easy to buy underfloor heating while doing some good along the way. This is a truly inspiring growth story.”

Now in their 20th year, the Growing Business Awards are the most established and respected celebration of SME success in the UK, bringing together some of the UK’s most successful and inspiring private companies to celebrate achievement and the vital role SMEs play in supporting the UK economy. Entrants go through rigorous interviews and assessment by a panel of experienced judges with previous winners including Innocent Drinks, Betfair and Love Film.

Founded by Michael and Steven Lewis in 2008 when their electrical contracting business went bust in the recession, The Underfloor Heating Store started as a website offering next day delivery of products such as heating mats, thermostats and insulation. In 2013 it was named in the Sunday Times Virgin Fast Track 100 for Britain’s fastest-growing private companies and now has its own brand of underfloor heating system, a turnover of £29 million and ambition to grow from a UK-based business into a global brand over the next 3 years. 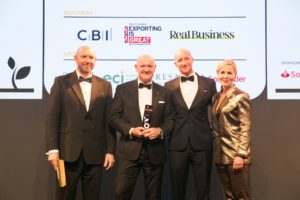 Michael Lewis, joint founder of The Underfloor Heating Store, said, “We’re absolutely delighted to have won such a prestigious award. We started all this from nothing and have worked so hard to be the best in all areas of the business. Winning at this level is real recognition of how far we’ve come and the effort put in by the whole team.”

For more information on The Underfloor Heating Store visit www.theunderfloorheatingstore.com.

I'm the Assistant Editor on BMJ. If you have any product or people information, or some news you'd like to share, please feel free to email me.
Previous Domus Ventilation appoints national specification sales manager
Next Current KNX Training Courses