The Shadow Chancellor talks carbon emissions to the BMF 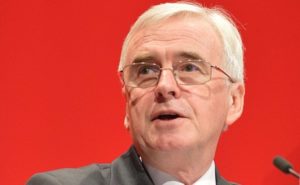 “Public and private sector finance will both be required to invest in Labour’s green industrial revolution to move to a zero carbon economy”, John McDonnell MP has told the Builders Merchants Federation. “And if there needs to be support for businesses to help in the transition, we’ll look at tax reliefs to help them scale-up.”

The Shadow Chancellor was answering a question from Brett Amphlett, who represented the BMF at a Labour Party event in the City of London this week. McDonnell was giving a keynote televised speech on tackling the ‘climate emergency’ in the wake of recent public protests.

Brett Amphlett, BMF Policy and Public Affairs Manager, asked John McDonnell MP if he – as a future Chancellor of the Exchequer – is prepared to intervene in the tax system and give Enhanced Capital Allowances to help manufacturers scale up for hydrogen or new fuels not yet discovered. He reminded the MP that BMF members make and deliver the gas-powered central heating and hot water systems, heat pumps and other technologies used in all types of buildings.

McDonnell said he wants public and private finance to invest in the technology needed to deal with the climate crisis. The Labour Party is looking at a combination of regulation and incentives to ensure future requirements have proper regulation and proper standards for retrofit and new build.

The speech took place at UK Finance, the financial services’ trade association, in front of an invited audience of bankers, mortgage providers and business representatives like the BMF.

The Shadow Chancellor also told Amphlett that Labour is reviewing the entire financial system to see how each sector of the economy is responding to the ‘climate emergency’. “Each of Labour’s shadow ministerial teams is tasked with producing a programme of action defining their Department’s contribution to tackling climate change”, McDonnell added.

I'm the Assistant Editor on BMJ. If you have any product or people information, or some news you'd like to share, please feel free to email me.
Previous Expamet offer support with new BIM Models
Next Stepnell’s new Operations Manager