Stephen Betteridge celebrates half a century at Red Bank 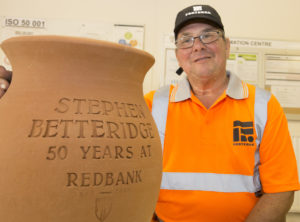 A plaster mould maker from Leicestershire has been presented with a long service award for 50 years of loyal work for clay building product specialists Red Bank, part of Forterra.

Stephen Betteridge (65), of Measham, in Leicestershire, started working at the local clay chimney and ridge tile maker on Monday, 8th July 1968, after leaving Ashby Ivanhoe School the previous Friday. In the five decades since, he has made many thousands of chimneys for buildings across the UK.

He was presented with an award for his long service by Forterra Chief Executive Stephen Harrison, and also received a special commemorative clay pot from his colleagues, presented to him by Red Bank General Manager Paul Barson.

Betteridge said, “I’ve always lived here in Measham, just five minutes away from where I work. I cycled in every day for forty years, but I’ve been using a car for the last ten!”

He attended Stoke Technical College for five years in the 1970s, where he gained specialist qualifications in mould-making. 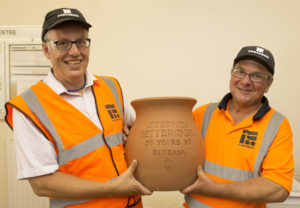 Betteridge went on, “I’ve loved having a job for 50 years, in which I’ve used skills to create things that other people simply can’t. Lots of other chimney manufacturers have fallen by the wayside, or stopped specialising in the sort of thing we do, so if people want to get new bespoke, or replacement chimney pots, they have to come to us.”

Red Bank was established in 1919, and celebrates its centenary next year, meaning that Betteridge has been with Red Bank for more than half as long as it has been in business.

Stephen Harrison, Chief Executive of Forterra, said, “I was delighted to present Stephen with his award for 50 years of dedicated service. We have a lot of loyal staff working for Forterra, with more than a quarter of all employees having worked here for 20 years or more.”

Red Bank produces one of the UK’s longest established and most comprehensive range of chimney and roofing components, with bespoke products including fire-backs, clay and concrete flue liners, chimney pots and ridge tiles.

For more information about Red Bank, which is part of Forterra, visit https://www.forterra.co.uk/. You can also follow Forterra on Facebook and Twitter via @ForterraUK and also on LinkedIn.

I'm the Assistant Editor on BMJ. If you have any product or people information, or some news you'd like to share, please feel free to email me.
Previous Actis launches installation video tutorials for new easy-to-use roofing membrane
Next New Class Furniture in Snow Gloss by Rotpunkt

Steve Marshall has not only taken over as managing director of Strand Hardware, but also …