SR Timber’s staff are no dummies on Heart Health 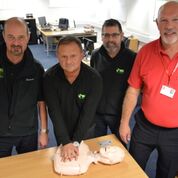 SR Timber has hosted a Heart Health session for its staff, run by the British Heart Foundation (BHF), which included a demonstration of CPR, as part of its partnership with the charity.

The team at the Nottinghamshire-based company – which is the UK’s leading supplier of roofing batten – joined in the session as part of World Heart Day to get a better understanding of how to look after their own hearts and what to do if someone has a heart attack.

Staff practised CPR on Annie, the BHF dummy, as well as learned about cardiovascular disease and how to reduce the risks associated with it.

The session was organised by SR Timber’s Operations Manager Steve Hill – who has been appointed to the role of Heart Monitor within the company to coordinate its fundraising activities for the charity – and he said that the importance of heart health hit home to staff after the BHF said that in the East Midlands (where SR Timber is based) alone, around 19,249 people devastatingly lose their lives to conditions including heart disease, stroke and heart failure every year.

“The BHF’s Heart Health session was a real eye-opener for everyone at SR Timber, and we’re all very glad we took part because it made us realise that virtually everyone is touched by cardiovascular disease in some way,” said Steve.

“As well as giving us lots of information, there was a very practical side to it, and giving everyone the opportunity to practise on Annie was invaluable because CPR really can be the difference between life and death.

“The session served to help us to double our efforts in raising awareness and much-needed funds for the charity, which is the biggest independent funder of cardiovascular research in the UK.”

As part of the Heart Health session, a representative from the BHF covered some of the risk factors that increase the likelihood of getting cardiovascular disease, such as smoking, high blood pressure, high blood cholesterol, physical inactivity, being overweight or obese, having diabetes or having a family history of coronary heart disease or stroke.

It also covered some of the symptoms of a heart attack, such as pain or discomfort in the chest that doesn’t go away (with the pain then spreading to the left or right arm or even to the neck and jaw), feeling sick and having a shortness of breath.

SR Timber’s Trading Director Shaun Revill said that the session was ideally timed ahead of its first fundraising event, where it will hold a family fun day for the BHF, after the company chose a charity partner in order to adopt a more consistent approach throughout the year where everyone at the company can get involved in a range of initiatives to raise money.

“Partnering with the BHF has been a very good thing for our business to give us a focus for charitable activity to raise much-needed money for a very good cause, but it’s also bringing us closer together as a team. Sessions such as this help to make sure we’re looking out for one another.”

The company named the BHF as its charity partner during the summer of 2018 and stated its intention to develop a closer, longer-term relationship with the charity, having previously raised more than £5,000 in 2016 after two of its team climbed Mount Kilimanjaro.

I'm the Assistant Editor on BMJ. If you have any product or people information, or some news you'd like to share, please feel free to email me.
Previous Chinese Minister visits Travis Perkins
Next Apple-Powered Digital Job Box to transform construction