A team from SR Timber has signed up to run a half-marathon this September – and they are throwing down the gauntlet to merchants and roofers to join them and see who can raise the most money for charity.

The four-strong team led by newest recruit Mark Parkes has signed up for the Richmond Runfest Half Marathon – a British Heart Foundation (BHF) event on Saturday 14th and Sunday 15th September 2019. 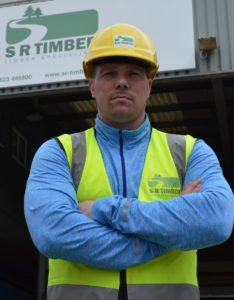 Trading Manager Parkes said that the team at the North Nottinghamshire-based company looked at the list of BHF fundraising events this year and the Richmond Runfest stood out as a good team-building opportunity for the company – and the idea of challenging others in the industry snowballed from there.

Parkes, who was an Acting Staff Sergeant in the Parachute Regiment before he joined SR Timber, said the friendly rivalry of challenging other businesses from across the industry may be the springboard to raising even more money for charity.

“For a small company, SR Timber has a track record of raising large sums of money for charity, and we partnered with the BHF last year as part of a longer-term commitment to a cause that is very close to our hearts,” said Mark.

“A half-marathon will be a challenge for some of the team at SR Timber, and we know that we can raise a lot of money for the BHF – but if we know we’re competing against others such as merchants, it’ll spur us on to be the first team across the line and the ones who present the BHF with the biggest amount.

“We’d love to hear from anyone from right across the industry – from timber importers to merchants to roofing contractors and housebuilders – who are up for the challenge of running a half-marathon and raising money for a lifesaving cause.”

Teams from SR Timber – which is a leading importer of timber products and the UK’s largest importer of roofing batten, including its flagship Premium Gold – have previously climbed Mount Kilimanjaro and driven in a rally across Europe – raising more than £10,000 for a number of charities.

Trading Director Shaun Revill explained that the partnership with BHF is a move towards a consistent approach to its fundraising efforts and also raising awareness around an issue of heart and circulatory disease that still kills one in four people here in the UK.

“We’ve done some landmark event fundraising in the last few years but are now doing things on a more regular basis – and often tying in with events on the BHF’s calendar,” said Revill.

“Mark has joined us with bags of enthusiasm and the half-marathon is right up his street, and he’s signed us up to take part. It’ll be brilliant to be part of a BHF event and it’s great for developing relationships in our industry by working together – fuelled by friendly rivalry – to raise as much money as possible for something that affects people from every walk of life.”

Anyone wanting to accept the challenge can contact Mark Parkes at MarkParkes@sr-timber.com.

I'm the Assistant Editor on BMJ. If you have any product or people information, or some news you'd like to share, please feel free to email me.
Previous Husky sliding door hardware
Next #KnowThyNuts On The Tools raise awareness in collaboration with Movember