The group – which included the Confederation of British Industry (CBI), a high street bank and leading business figures – spoke to Mrs 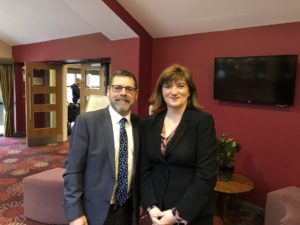 Morgan at the event at Loughborough University and expressed genuine concern about how Parliament and the government are handling what the MP described as a “political and constitutional crisis”.

Revill was quick to tell the MP for Loughborough about the case of SR Timber –which is a leading importer of timber products and the UK’s largest importer of roofing batten, including its flagship Premium Gold.

He said that that since the Referendum in 2016, he has faced constant questions from suppliers – in particular those in SR Timber’s supply chain in the Baltic states – asking what’s happening in the UK. He also said that the continued uncertainty over Brexit means his suppliers are themselves under pressure because the UK is their largest market.

“There are rumours swirling around Europe that the UK will grind to a halt in the days and weeks after Brexit – and this is making our suppliers understandably very nervous,” said Revill.

“Mrs Morgan was quick to point out that the civil service and government departments have lots of plans and contingencies in place, but the group criticised the government for not promoting this and not communicating this better to countries in the EU.”

The group discussed the example of transportation costs of distributing materials once they arrive at UK ports and many of the businesses said they had faced rising costs – which they had to absorb because they couldn’t pass them on.

They also discussed how, since the result of the Referendum in 2016 was announced, the value of the pound had plummeted against other currencies and, again, this had driven up costs, which again, businesses around the table said they were struggling to pass on to their customers.

“When I mentioned the case of battens, Mrs Morgan quite rightly asked the question about when regulators are being pushed to enforce standards,” said Revill. “The reality is that they’re not as robust as they should be. British Standards have been developed for specific reasons – such as the quality of materials – and they should be adhered to, Brexit or no Brexit.”

When asked what contingencies businesses around the table had taken to plan for Brexit, there was a very clear divide between FTSE companies and businesses such as SR Timber.

“The CBI said that some of the largest businesses were spending more than £100m to prepare, and their boards were spending up to 80% of their time planning,” said Revill. “If we did that, we wouldn’t have a business left to run.”

Reflecting on the event, Revill said that it was a great opportunity to meet other businesses who import and share experiences around the challenges of importing.

“Given the timing – just a week before the UK was supposed to leave the EU – and the fact that there’s so much uncertainty out there, it was a very constructive meeting,” said Revill.

“Mrs Morgan listened to our concerns and did give us reassurance that the government had quietly gone about putting lots of things in place ready for the UK leaving the EU; it’s just a shame they haven’t been more vocal and reassuring and giving businesses more certainty.”

I'm the Assistant Editor on BMJ. If you have any product or people information, or some news you'd like to share, please feel free to email me.
Previous No-Deal Comment from the FTA
Next Howard introduces biodegradable packaging