A special garden which wowed crowds at the Chelsea Flower Show is being relocated to Cricklewood – with a helping hand from builders merchant Selco, part of the Grafton Group.

The ‘Life Without Walls’ garden was initially on display at the  Chelsea Flower Show in May and was aimed at benefitting disadvantaged groups, from those with HIV to dementia sufferers. Selco Builders Warehouse has donated more than £3,000 worth of materials to help the showpiece become a reality on the Watling Gardens estate.

Rather than the garden being broken up after the show it was agreed to relocate it Cricklewood, with the community coming together to make the dream a reality.

Selco has provided a host of materials, largely contributing to a path which will provide access for wheelchairs.

Gerry Cullen, branch manager at Selco Cricklewood, said: “Supporting the communities in which we operate is a big part of the Selco philosophy and this is going to make a real difference to the people of Cricklewood. 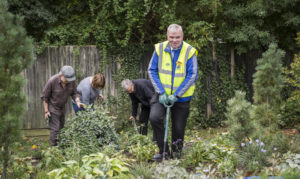 “It will also brighten up the grounds of the plot where the garden is situated and further knit the community together.”

The moved garden is being officially launch this Saturday (September 22) .

Group Managing Editor across the BMJ portfolio.
Previous Elliotts team heads off to France for charity
Next Dakea drives into UK Construction Week