Scott Parnell raises over £5,000 for charity 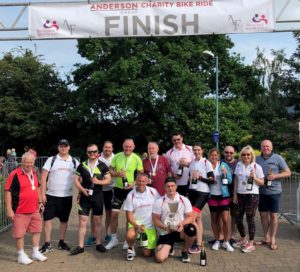 Two colleagues from Scott Parnell have helped raise over £5,000 for charity following a 55-mile bike ride.

Steve Parnell and Rachael Adamson – both directors at the groundworks and civil engineering supply specialists – took on the Anderson Charity Bike Ride, a picturesque but challenging route around the pretty villages of Essex, to raise funds for the National Autistic Society. The charity provides information, support and pioneering services for those living with autism.

Following a training schedule, which involved cycling up to 15 miles per week, Steve and Rachael completed the challenge alongside 14 other team members called Charlie’s Angels, finishing in under 5 hours.

Rachael, who is Director South East at Scott Parnell, said:

“Riding the route was tough at times, but thinking about how much good we were doing for the charity definitely spurred me on to the finish line. It’s been a great experience. I am really proud of the whole team and the difference the money will make to those living with autism.

“The event was organised to the highest standard by M Anderson, and everyone involved in the day should be very proud, especially all the volunteers who gave up their time to make it such a success.”

I'm the Assistant Editor on BMJ. If you have any product or people information, or some news you'd like to share, please feel free to email me.
Previous Roofing’s young bloods shortlisted for national apprentice final
Next Aggregate Industries helps to keep housebuilders in supply