A woman from Colchester will be running the London Marathon to raise funds in memory of her daughter, who died at six weeks old.

Helen Oberholzer, who is a keen runner and has been waiting years to be awarded with a place in one of the world’s best known marathons, will be running in aid of the neonatal care charity, Bliss.

Oberholzer and her husband, Bart, lost their daughter Jessica in 2004 after she was born three months early. 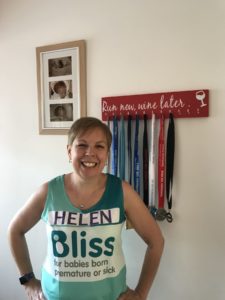 “Jessica was cared for by the neonatal unit at Cardiff Hospital. We will forever be grateful for everything the staff did for Jessica during her short life – the support they gave us was invaluable.

“There are more than 100,000 babies born needing neonatal care every year. The amazing work BLISS is doing to support neonatal units, and parents like us, across the country is so important. This is the reason I am raising funds for the charity in memory of Jessica.”

Scott Parnell in Witham, where Helen works as a Finance Manager, will be supporting her endeavours, and has already helped her to raise hundreds of pounds towards the cause. Rachael Adamson, who works alongside Oberholzer as Depot Manager, said “Everyone at Scott Parnell is rooting for Helen. She is a really determined person and extremely dedicated to her training. She has been waiting a long time for the opportunity to run in the London Marathon and I’m so happy she is finally getting the chance to take part.”

To find out more about Helen’s story or to make a donation to Bliss, visit Helen’s JustGiving page www.justgiving.com/fundraising/Helen-Oberholzer1.

I'm the Assistant Editor on BMJ. If you have any product or people information, or some news you'd like to share, please feel free to email me.
Previous 19 year-old crowned national Apprentice of the Year
Next Wienerberger acquires BPD to strengthen position in roof market