A Scott Parnell employee has raised more than £4,700 for the neonatal care charity, Bliss, after completing the London Marathon in memory of her daughter, who died at six weeks old.

Helen Oberholzer had waited years to be awarded with a place in one of the world’s best known marathons and was thrilled when she crossed the finishing line, recording a time of 5 hours, 7 minutes. 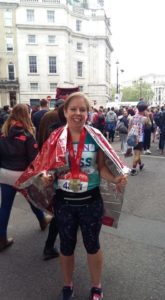 She and her husband, lost their daughter Jessica in 2004 after she was born three months early. Oberholzer explained that the support they received from the neonatal unit at Cardiff Hospital, where Jessica was cared for, was absolutely invaluable.

Commenting on her run, she said:

“I struggled at times from tiredness, particularly when my energy levels started to drop around mile 15. By mile 23 I was finding it extremely tough, but the support and atmosphere the whole way along was amazing. It was a truly incredible experience that I will remember forever. I couldn’t have done it without the continuous encouragement from my friends and family. I am so grateful for everyone’s generosity in helping me to raise so much money on behalf of Bliss.”

Amongst her supporters was her employer, Scott Parnell in Witham, where she works as a Finance Manager. The civils and drainage supplies specialist doubled Helen’s initial fundraising total by donating a further £2,388 bringing the final amount raised to £4,777.62.

Rachael Adamson, who is Branch Manager at Scott Parnell Witham, said “Congratulations to Helen. What she has done for the charity is fantastic. We couldn’t be more proud of her and her amazing achievement.”

To find out more about Helen’s story or to make a donation to Bliss, visit Helen’s JustGiving page www.justgiving.com/fundraising/Helen-Oberholzer1.

I'm the Assistant Editor on BMJ. If you have any product or people information, or some news you'd like to share, please feel free to email me.
Previous Local Sporting Hero officially opens new James Burrell branch
Next BLANCO supports Kilimanjaro climb

SureCav announces 2020 as a record year for sales and enquiries. The average growth in …