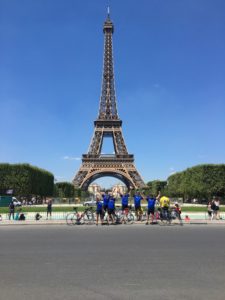 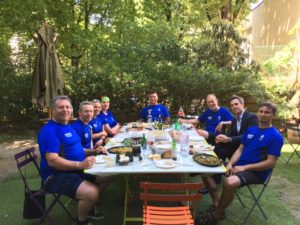 On 25 June, a team of seven from Saniflo UK set off from the company’s UK headquarters in South Ruislip outside London to cycle approximately 220 miles to SFA Group’s global headquarters close to the Eiffel Tower in Paris in a bid to raise £6,000 for Cancer Research UK as the company marks the 60th anniversary of the invention of the macerator. The Saniflo cyclists arrived in Paris on Thursday 28 June, beating their £6,000 target.

Saniflo MD, Tim Pestell, comments: “It’s not the first time we’ve completed this bike ride from Ruislip to Paris to raise money for Cancer Research UK. This year was extra special as we remembered Saniflo UK’s former MD Paul Newson – who passed away in January 2014 after a seven-year battle with cancer – and the contribution he made to Saniflo and the rise of the company in the UK, as globally we celebrate 60 years of innovation at Saniflo since the invention of the first Saniflo macerator.

“We like to raise funds for this hugely important cause in one big way at least once a year and this year we’ve chosen, once again, to cycle to Saniflo’s global headquarters in Paris and we’ve been preparing for a few months now. The last time we cycled to from Ruislip to Paris was in 2014. We’re delighted to have surpassed our £6,000 target and we thank everyone who donated.”

People can still donate via the company’s Just Giving page at https://www.justgiving.com/fundraising/saniflosfa

I'm the Assistant Editor on BMJ. If you have any product or people information, or some news you'd like to share, please feel free to email me.
Previous BPS open new showroom at their Head Office
Next Rudridge promotes Paul Duke and Emma Taylor