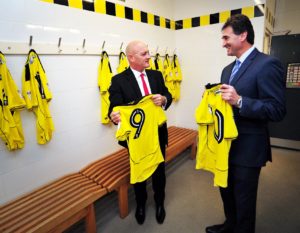 It is a hat-trick for Russell Roof Tiles, as the roofing tile manufacturer announces that it will once again be supporting Burton Albion for a third consecutive year.

Following a successful two seasons of sponsorship, Russell Roof Tiles is supporting Burton Albion’s 2018 / 2019 season with the first game having already kicked off at the Pirelli Stadium earlier this month.

Employing 160 staff at its two sites in Burton and a further site in Lochmaben, Russell Roof Tiles has chosen to sponsor the boards and East Stand for an undisclosed sum. The manufacturer will also be sponsoring Burton Albion Academy’s Under 15s football team for a second year.

This renewed deal signifies a real commitment by Russell Roof Tiles to strengthen their relationship with Burton Albion.

Also known as “the Brewers”, Burton Albion will be playing in League One this season and is led by manager Nigel Clough (son of the famous Brian Clough).

The East Stand is once again, expected to welcome thousands of away supporters this season, with fans travelling from as far as Barnsley, Portsmouth and Coventry to visit the stadium and watch their team in action. 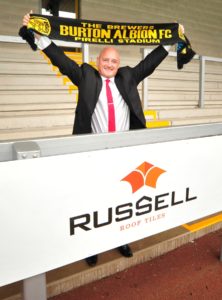 mmunity, whether it be through charity work, volunteering or sponsorship.

“With a number of our employees already keen Burton Albion fans, sponsoring the team for a third consecutive year was a no-brainer. It has always provided us with the golden opportunity to not only support our local community and team but to also raise awareness of our brand.”

Russell Roof Tiles is a leading independent roof tile manufacturer providing products for leading UK house builders and high-profile social housing and commercial projects, where sustainability and eco-credentials are of the utmost priority.

I'm the Assistant Editor on BMJ. If you have any product or people information, or some news you'd like to share, please feel free to email me.
Previous Actis backs call to make homes cooler following MPs’ heatwave warning
Next The ERA Lockdown Emergency Barricade