A community-minded roofer was nominated as a ‘Local Hero’ for his inspiring acts of generosity for the National Federation of Roofing Contractors’ 2018 UK Roofing Awards, sponsored by SIG Roofing.

John Davis of JD Roofing was recognised by staff at the SIG Roofing Wigan branch, who regularly hear about his local community support and how incredibly highly people speak of him. 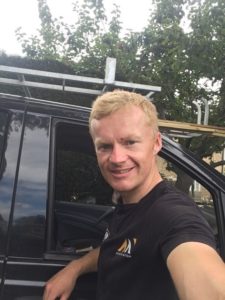 Davis frequently goes above and beyond for those in his community, particularly the elderly or less well-off, by fitting or replacing their roofs for a discounted rate, or for free.

He said: “I am very flattered to have been a nominee for the Local Hero award. I have always believed that we as humans should do as much as we can for people. If you can be a decent person and do someone a favour, I believe that it’ll come back and reward you later in different ways.”

The staff at SIG Roofing’s Wigan branch also explained how the roof of a heavily pregnant woman was left in a bad state, whereby John took it upon himself to fix the roof free of charge, costing him hundreds of pounds.

Throughout his roofing career, Davis has been no stranger to being generous.

“A few years ago, I’d been recommended to appear on a show which had the aim of coming in and rectifying and restoring poorly fitted roofs of the general public, free of charge.”

“I don’t feel that I’m going out of my way, but I do feel that there’s just not enough generosity anymore, so I like to try and do my bit when I can. There’s no science behind it!”

The annual National Federation of Roofing Contractors UK Roofing Awards recognises the best of the best in the roofing sector.  As the awards’ headline sponsor, SIG Roofing was also pleased to support the Local Hero awards as a way of acknowledging outstanding roofing contractors who go the extra mile for their local community and are so often unsung heroes.

I'm the Assistant Editor on BMJ. If you have any product or people information, or some news you'd like to share, please feel free to email me.
Previous New Norwich Store for Kent Blaxill
Next New Acquisition for AkzoNobel’s Dulux Decorator Centre business