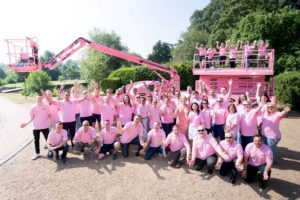 It has repainted two of its most popular access platforms pink and named them Suzie and Betty to raise awareness about the disease on worksites and in public places up and down the UK.

‘Betty Boom’ and ‘Suzie Scissor Lift’ will be hired to clients to promote the work of Breast Cancer Now, which is playing a leading role in reducing the number of deaths caused by the cancer.

For the duration of the campaign, five per cent of all hire fees for the eye-catching machines will be donated to the charity – while employees have pledged to take part in more fundraising events during the year.

Mick Ledden, Riwal UK Country Manager, said: “We are very excited about what we hope to achieve for Breast Cancer Now in the next 12 months. Our staff voted for the charity and are ready to put their all into supporting it.

“We already have advance orders for Suzie and Betty, so there are early signs that our clients will be enthusiastic with their support as well. We’d like to urge other powered access users to do the same.

“It really will be the case of powered access being pretty in pink for a very good cause. Breast Cancer Now does brilliant work carrying out research that is saving and prolonging the lives of tens of thousands of people. It has ambitious targets for further success, and we want to help the charity achieve them.”

Riwal UK is part of the global Riwal company that delivers innovative, high quality powered access rental and sales services in 17 countries. It launched its Breast Cancer Now campaign at its first ever summer conference.

Sue Stannard, who has had the disease, spoke at the conference on behalf of Breast Cancer Now. She said: “The commitment shown by Riwal to supporting Breast Cancer Now is incredible. Suzie and Betty will be seen by tens of thousands of people, which is very exciting.

“Breast Cancer Now’s vision is that by 2050 nobody should die from the disease. That’s a very bold statement. But we hope, by then, that breast cancer will be viewed not as a deadly disease, but as a chronic condition that can be managed over many years, saving thousands of lives as a result.

“That can only be done with continued research and awareness about what can be achieved. Over the next 12 months, I’m sure the team at Riwal, and their customers, are going to help immensely on both counts.”

Her mother, Diana, died from the disease, aged 48. Due to the hereditary risks associated with some breast cancers, since Claire was 29 she has been having annual mammograms and additional checks.

Claire said: “I have many colleagues at Riwal whose lives have been touched by breast cancer and are living with its effects, and that will be the same at workplaces up and down the country.

“That’s why we’re all passionate about wanting to help Breast Cancer Now. Through hiring out Suzie and Betty and fundraising throughout the year, we have a chance to change lives for the better, which is fantastic.”

Suzie, a Holland Lift B-195DL25 4WD scissor lift, and Betty, a JLG 600AJ Boom, will be available for hire anywhere in the UK via Riwal UK’s four depots.

As well as donating five per cent of hire fees for Suzie and Betty, Riwal UK’s teams will also take part in quarterly fundraising events during the campaign which runs until July 2018.

Mick Ledden said: “Riwal UK always aims to make a positive difference in the local communities where we work. We see this as a great opportunity to work with clients to raise awareness about Breast Cancer Now and share the positive impact of supporting such a good cause.”

Anyone who wants to make a donation to the Riwal UK Breast Cancer Now campaign can do so on our Just Giving page: www.justgiving.com/riwal

I'm the Assistant Editor on BMJ. If you have any product or people information, or some news you'd like to share, please feel free to email me.
Previous Cancer Centre builds on Visqueen’s Ultimate Geoseal
Next Petite proportions with Roper Rhodes Trade sector urged to ‘open the door’ to mental health