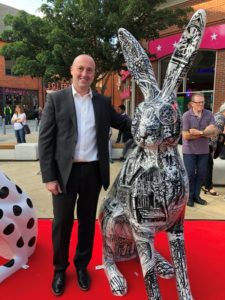 it is supporting Norwich’s charity public art trail GoGoHares this summer, as their official logistics partner.

One of Norfolk’s newest and biggest tourist attractions, the large-scale contemporary art extravaganza sees 50 hare-shaped masterpieces placed around some of Norwich’s biggest and most historic landmarks for families, tourists and individuals to hunt down using a map.

Ridgeons is supporting the event by sponsoring The King of Scribble, a striking hare sculpture designed by Sophie Li-Rocchi, Head of Art (Prep) at Gresham’s School in Holt, Norfolk. A small army of Ridgeons staff even gave up their Father’s Day to drive round the county delivering the GoGo superstars.

GoGoHares is being brought to the city by children’s charity Break, which is celebrating its 50th year of supporting children, young people and families in need, and by Wild in Art, which organises public art trails around the world. Ridgeons has been working with Break on their previous sculpture trails and are delighted to be able to partner with them for the third time.

Martin Hurrell, Head of Region (North) at Ridgeons, said: “Everyone at Ridgeons is incredibly excited to be involved with such an inclusive, fun and family-friendly community project.

“We’re confident that it will prove be one of the most spectacular public art events Norwich has ever seen. The cultural spectacle will help bring the city to life throughout the summer and should draw what we hope and expect will be record attendances, as it builds on the successes of the GoGoGorillas and GoGoDragons trails in recent years, which we have supported.

“We would like to encourage everyone to get involved with GoGoHares – bring your friends and families to Norwich and enjoy the trails of the unexpected.”

The event launched in Norwich city centre on Sunday, 24 June and will end on Sunday, 9 September.

A further 18 GoGo hares will form an additional public art trail around the wider county, while from July, 2 more than 160 leveret – or young hare – sculptures will also be leaping into Norwich to add to the community fun.

Ridgeons is one of the largest independently owned builders’ merchants in the UK and trades from 26 merchant branches in the East of England. The Group also includes PlumbStock, Anglia Tool Centre, Ridgeons Forest Products and CRS Wholesale. Turnover stands at £160 million per annum and Ridgeons Group employs around 850 people. www.ridgeons.co.uk

I'm the Assistant Editor on BMJ. If you have any product or people information, or some news you'd like to share, please feel free to email me.
Previous Dakea’s support for Stormspell Merchant
Next April sales for merchants hold up