The sports broadcaster Ray Stubbs, one of the best-known voices in football, will host the Business Conference at BMF Members Day which takes place at St George’s Park, Burton on Trent, the home of England’s 28 national football teams

Stubbs’ career began rather modestly – he describes himself at the worst left-back in the history of Tranmere Rovers, having never progressed beyond the reserve team – but he went on to carve a successful career in sports broadcasting.  Following two decades at the BBC covering football, snooker and darts, he headed Premier League football coverage for ESPN, moving on to BT Sport and Talksport, where he hosted the Ray Stubbs Show.

He may not have dazzled on the football field, but Ray’s natural gift for words, honed over four decades “talking nonsense about football” make him an entertaining and highly engaging host.

BMF CEO, John Newcomb said: “With BMF Member’s Day to be held at the home of England’s national football teams for the first time, we are delighted that it will be hosted by one of football’s best-known broadcasters, Ray Stubbs.”

The theme of BMF Members’ Day 2018 is “The Future belongs to the Bold”.  The Business Conference and the BMF’s black-tie Awards Dinner, which celebrates the achievements of young people working in the industry, both take place on 27th September.  The BMF’s annual Golf Tournament and other social activities will be held on the previous day, 26th September.

The BMF thanks our Members’ Day headline sponsor, Encon Insulation, and Marsh Industries and Monument Tools, who sponsor the Awards Dinner and 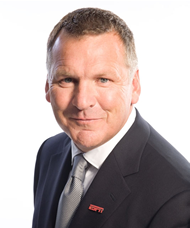 I'm the Assistant Editor on BMJ. If you have any product or people information, or some news you'd like to share, please feel free to email me.
Previous Stop Selling Septic Tanks and Sell Up Instead
Next Keyline employee celebrated for completing Warehouse to Wheels programme​