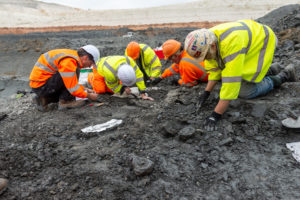 In the summer of 2018, parts of a fossilised Pliosaur skeleton were found buried in land operated by building materials supplier, CEMEX. The remains of this savage predator, a prehistoric sea monster that lived over 155 million years ago, will be going on display at North Lincolnshire Museum in Scunthorpe

Pliosaurs were marine reptiles, not dinosaurs.  They were the top predators of the seas and the specimen found would have been a creature of over 8 metres long and 4 metres wide.  According to today’s experts, Pliosaurs dominated the seas for around 75 million years, had an enormously powerful bite, complex system of sensory organs in their snouts, great eyesight and the ability to taste water as they swam to locate prey. No wonder they were top of the food chain!

Various parts of this creature have been found among clay and limestone including 29 vertebrae, a tooth, 14 ribs, humerus (bone of the upper forelimb) and some of the small bones that were at the tip of the upper jaw, premaxilla. Many of these pieces are being cleaned and preserved for display.

“Although the specimen is not complete it tells a fascinating story of how the carcase was broken down by scavenging and decay in the ancient Kimmeridge Clay seas. Because top predators are much less common than their prey, this is indeed a rare find.  We have hundreds of s 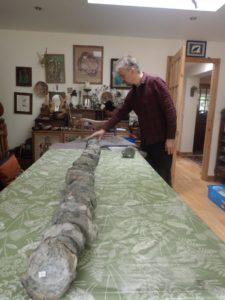 pecimens of other marine reptiles but only a handful of Pliosaurs,” comments Richard Forrest, one of the country’s leading expert of Pliosaurs.

The finds were discovered by the Stamford and District Geological Society, led by Darren Withers and involved excavation over a six month period.

The remains will form part of a temporary display in  North Lincolnshire Museum in Scunthorpe from the end of February, prior to a permanent exhibition being installed later in the year.  The museum’s collection houses a number of specimens of other marine reptiles but as top predators are much less common than their prey, there is only a handful of Pliosaurs that have been unearthed around the world.

“We are really excited for everyone to see the Pliosaur. It’s not every day you get to see remains of a creature that lived around 75 million years ago.”

I'm the Assistant Editor on BMJ. If you have any product or people information, or some news you'd like to share, please feel free to email me.
Previous Bradstone Launches 2019 Training Academy
Next There’s no Silver Bullet for Saving the Planet, says Vaillant Group