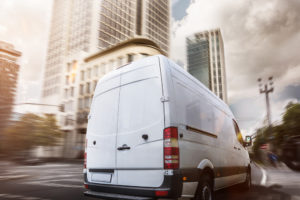 Van drivers have been warned to take more care on the roads amid concerns their bad driving could be bad for business.

Experts at one of the UK’s leading suppliers of vans to tradesmen and women LeaseVan.co.uk say poor van driving could be enough to put people off dealing with a company.

They warned customers to ensure vans are driven courteously and that speed limits and other road users are respected at all times.

The van leasing specialists warned that badly driven vans could be costing the sector millions in lost revenue every year – with small businesses likely to be hardest hit.

Examples of bad driving likely to lead to lost business for van drivers include cutting up other motorists, racing away from traffic lights, failing to stop at zebra crossings and pulling out abruptly from junctions.

Because vans are often branded with a company’s logo and contact details it makes it very easy for other road users to boycott a firm if they take umbrage.

The experts are urging more companies to train van drivers on customer service and on how best to represent their employer while out on the roads.

A spokesman for LeaseVan.co.uk said: “Van drivers need to realise that each and every time they get behind the wheel they are an ambassador for their company.

“If they then tear about cutting people up, racing through traffic lights on amber and failing to stop at zebra crossings they are going to create a very bad impression for their company with other road users and the general public.

“Many companies employ drivers without making it absolutely clear to them that they are ambassadors for the brand.

“In some cases these drivers will interact with more members of the public each day than the average salesperson for the company so they should really be given training on how to conduct themselves on behalf of the company.

“If a van is driven badly it’s likely to be remembered for all the wrong reasons and if it’s branded with logos and other details it’s likely to lose lots of orders for the company.

“Branded vans can be very powerful mobile adverts for a firm but if they are poorly driven they could actually be costing sales.”

He said even small businesses such as one-man-band plumbers and builders need to be mindful of how their driving is perceived when out on the road.

But he warned larger firms to ensure all their drivers understand their roles of company ambassadors urgently.

He said: “Small companies with perhaps one or two vans usually understand that they are representing the firm when they are on the way to and from jobs.

“But when a company operates a fleet of vans and perhaps employs hundreds of drivers then the message that drivers are brand ambassadors can get lost.

“We would like to see all fleet operators speak to their drivers and ensure all of them understand the need to drive sensibly and respectfully at all times.

“It’s not just good for business it’s also better for all of us who use Britain’s road network each day.”

I'm the Assistant Editor on BMJ. If you have any product or people information, or some news you'd like to share, please feel free to email me.
Previous BSW announces €40m investment plans for Slovenian sawmill
Next Grundfos BMF Centre of Excellence for South East

BMF prioritises member support with appeal to Government over COVID-19 Selling up? Talk to Collins