Polypipe, the UK’s leading plastic piping manufacturer, has helped three rare Asian bears to discover the joy of play and exercise their grey matter in their new UK home. 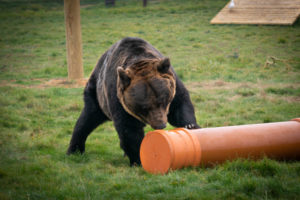 The Doncaster-based firm, part of the FTSE 250-listed Polypipe Group, donated plastic toys and puzzle feeders to the trio of Ussuri brown bears, which arrived at Yorkshire Wildlife Park (YWP) in August.

Polypipe roared into action after discovering the colossal critters were being relocated from their native Japan to the animal sanctuary in Branton, Doncaster.

The company worked with the wildlife park to design a variety of bespoke toys, which have become a hit with the burly beasts, brothers Kai and Riku, and 27-year-old female Hanako, following their epic 5,400-mile journey from the Far East.

Cameron McLellan, managing director at Polypipe Building Products, said: “Yorkshire Wildlife Park is doing such wonderful things for both the animals in their care and the local economy.

“As a Doncaster business, we’re delighted to be able to support the park and look forward to donating more items in the future.” 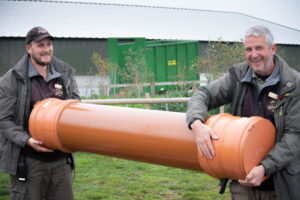 The project used donated materials to replicate the bears’ natural habitat and encourage them to explore and forage as they might in the wild within a four-acre reserve.

Simon Marsh, animal collections manager at the wildlife park, said: “The bears deserve to enjoy their time at YWP and we are sure the fantastic new toys and constructions will provide them with a lot fun and happiness.

“We are so thankful for the generosity and support of the local businesses and friends.”

The Ussuri brown bear is on the International Union for Conservation of Nature (IUCN) Red List of Threatened Species due to habitat loss and illegal hunting, with numbers dropping to around 10,000 in Japan.

The bears, also known as the Black Grizzly, can weigh up to 550Kg and live up to 35 years.

The Yorkshire Wildlife Park Foundation has been supporting animal welfare projects in Asia, including bear welfare workshops in Japan and UK charity Wild Welfare, a global organisation committed to improving welfare standards in captive wild animal facilities, to transfer the trio to the UK.

The park and the foundation support conservation and welfare projects around the world from the critically endangered Amur leopard in Russia, black rhino in East Africa to lemurs of Madagascar.

I'm the Assistant Editor on BMJ. If you have any product or people information, or some news you'd like to share, please feel free to email me.
Previous CRL Quartz Renaissance wins Best Surface of 2018
Next Research identifies reasons behind lack of apprentices