Pavestone rally the troops for charity

The Pavestone Rally is back. Following the huge success of the Pavestone 2017 Rally, the 2019 Rally will start on 5th September from Reims in Northern France to Stuttgart, Salzburg, Venice and finishing on the 8th September in the beautiful setting of Lake Como.

Entrants simply have buy a road-legal car for under £500 (the cheaper the car, the more fun!), dress it up and hit Europe’s greatest roads and cities for 4 days to Lake Como. Dressed in fancy dress, they have to complete challenges along the way, having a load of laughs, lots of fun – and all in aid of three well deserving charities, The Rainy Day Trust, Teenage Cancer Trust and Variety. 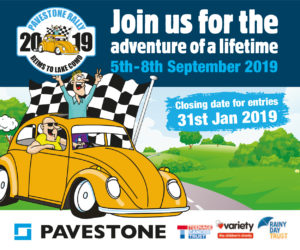 The 2017 Rally raised over £160,000 and was divided equally between Teenage Cancer Trust and Rainy Day Trust. In 2016 the Rally raised £60K for charity and the target for the Pavestone Rally 2017 was set at an optimistic £100K, which was well and truly smashed!

The bar has been raised even higher for the 2019 Rally and Pavestone have set a target of a whopping £175,000!

Pavestone’s Aaron Frogley, the event organiser said: “Over the last 3 years the Rallies have raised in excess of £325,000!!  A truly staggering amount of money and would not have been achieved without all the teams fantastic fundraising efforts! We have a great laugh, we make friends for life and memories to last a lifetime, but what a great way to raise money for the charities!! I sincerely hope that the previous teams will be able to join us again in 2019 and of course any newcomers!”

He added, “I know it’s not a gruelling 26 mile marathon that a lot of fundraisers under go, but what great way to raise money for charity. One previous team member described the event similar to the Wacky Racers! Like being in a Top Gear challenge and Carry On film at the same time. Having had the best fun he’d had in years. Fancy dress wasn’t really his bag but as soon as the nurses uniform went on, he felt quite at ease! Everyone had such a crack, creating memories that will last a lifetime.”

For more details contact Frogley at pavestonerally@pavestone.co.uk or 07826 867888 or  register your team  at Www.pavestone.co.uk/pavestone-rally