Output stays low for second month in a row

The commercial new build sector is behind a continuing fall in construction output according to the latest monthly IHS Markit/cps index. 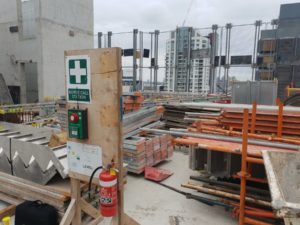 Although the headline figure, at 49.7 was up fractionally from the 49.5 posted in February, it still falls below the crucial 50.0 no-change marker.

Business activity dropped to its lowest point in the commercial sector since March 2018, the survey reveals, with most of the blame being placed at the door of Brexit-triggered uncertainty about the UK market outlook.

The civil engineering sector was also weaker, although residential building bucked the trend, with a modest upturn that was still the strongest seen so far this year.

Survey respondents reported increasing competition for new work and a reluctance to commit to new spending.
Crucially, business optimism edged up from its low point in February.

Joe Hayes, economist at IHS Markit, the compilers of the research, said: “Fears that the recent weakness of the U.K. Construction sector may not be just a blip but a sustained soft patch were further fuelled by the latest data. Amid subdued inflows of new work, the first back-to-back decline in output since August 2016 was seen.”

Duncan Brock, group director at the Chartetered institute of Procurement and supply said: “Not a small rise in job creation, optimism and new orders, nor more resilient house building was enough to buck the underlying downward trend in a sector suffering from client hesitation and consumer gloom. it is unlikely that next month will bring about any positive news given the challenge of a weaker UK economy, volatile pound and intense competition for new orders as Brexit continues to cast a long shadow over the sector’s future.”