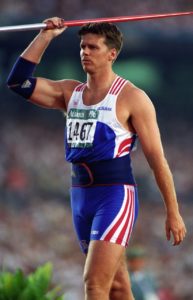 The Builders Merchants Federation (BMF) has confirmed that Steve Backley OBE, one of Britain’s most consistent and popular athletes who won medals at three different Olympic games, will speak at the first BMF Young Merchants Conference.

The BMF Young Merchants Conference, one of three special events held to celebrate the BMF’s landmark anniversary year, will take place on Thursday 11th October during UK Construction Week at the NEC, Birmingham.

For over a decade Backley established himself as one of the all-time greats of his sport.  In 2002 he was awarded the OBE  after being the first British athlete to successfully win four consecutive European Championship titles. After seven gold medals, three world records, two Olympic silver medals and one bronze – at Barcelona, Atlanta and Sydney – Backley finally hung up his javelin at the 2004 Olympic Games in Athens, showing he was still one of the world’s best by placing 4th in the final.

Since retirement from professional sport, Backley has written three inspirational books: The Winning Mind, The Little Book of Inspiration and, most recently, The Champion in All of Us: 12 Rules for Success.

BMF CEO, John Newcomb, said: “We are delighted that Steve will speak at our very first Young Merchant’s Conference.  His consistency and winning mentality can be seen in his record of high achievement over a decade.  It is a great message for the next generation of achievers in our own industry.”

Newcombe continued: “We are looking forward to welcoming those working in the merchant and building materials supply industry to the BMF Young Merchants Conference.  The day will embrace business and inspirational presentations, industry forums and networking opportunities.  Held at the NEC on the last day of UK Construction Week, we encourage all those attending to spend time at the exhibition too.”

I'm the Assistant Editor on BMJ. If you have any product or people information, or some news you'd like to share, please feel free to email me.
Previous Inflexion completes minority investment in Huws Gray
Next Jewson Launches Fund to Support People and Projects in need