Norbord answers the call of the Royal Marines

Royal Marines are enjoying new kitchens at their barracks in North Devon after Norbord, a leading wood panel manufacturer, answered an appeal for help on social media.

Following the closure of their barracks in Plymouth, 60 Marines were relocated to Royal Marine Base, Chivenor, but the three buildings allocated to them needed to be renovated. The Marines appealed for help with paint and building supplies on their Facebook page.

Derek Spears, Norbord’s Product and Application Specialist, and dubbed ‘Mr Fix-it’ by colleagues, took up the challenge and rallied support from some of Norbord’s suppliers.

He said: “The Marines had already painted and renovated their accommodation but they needed help to update the kitchen facilities in the three buildings. Each barrack only had three kitchen units and a counter top to service the 20 Royal Marines living in each one. Thanks to the support from some of our suppliers, we were able to arrange to fit out the kitchens and decorate them so they have a nicer environment to store and prepare food.”

Derek and his colleagues, Bill King and Richard Budge from South Molton, installed the first kitchen in early June and completed the remaining two by the beginning of July.

Jay, who is one of the Royal Marines on the base, was delighted with the results. He said: “We are truly humbled and overwhelmed by the sheer generosity. What started as a plea for help on social media has quickly grown into an unexpected and beautiful result. Acts of kindness, such as local communities supporting the Armed Forces, are hugely appreciated. We’ve been heartened by the amazing people willing to stand behind us with a helping hand.” 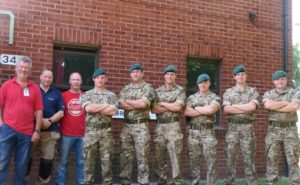 I'm the Assistant Editor on BMJ. If you have any product or people information, or some news you'd like to share, please feel free to email me.
Previous Marley Alutec welcomes new South East Area Sales Manager
Next Selco Steps In To Help Bristol’s Homeless