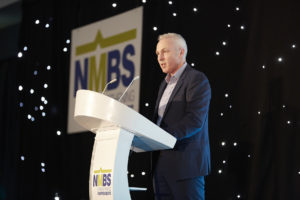 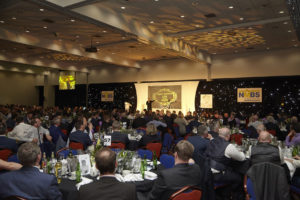 NMBS hosted this year’s event on Tuesday 10th April, the evening before the 2018 NMBS Exhibition, at the E.ON Lounge in the Ricoh Arena, Coventry.

Almost 650 guests gathered for the evening of fine dining, first-rate entertainment and the opportunity for some relaxed and informal networking.

Following a drinks reception – which included the chance to arm wrestle a polar bear courtesy of Keylite Roof Windows and its ‘Bear-o-meter’ challenge – guests were called through to dinner and welcomed by their host for the evening, comedian, author and columnist, Ian Moore.

Moore then introduced NMBS chairman, Tim Allen, who delivered an update on the buying society’s performance: “In 2017, NMBS once again enjoyed a record year and has seen its turnover increase by 11% to £1.7BN. Merchant members also enjoyed reimbursements and savings to the tune of £74M – a rise of £8M on the previous year.”

Allen also announced that he plans step down as NMBS chairman at the Buying Society’s next AGM in May, after seven years in the role during which time NMBS’ turnover has trebled.

Allen personally thanked the NMBS team for their support and assistance during his tenure as well as his fellow board members and the NMBS commodity committees, who help to ensure the buying society is run by independents – for independents.

Following Allen, NMBS managing director, Chris Hayward took to the stage to thank the outgoing chairman for his many years of hard work and input before presenting him with a token of appreciation.

Hayward was then followed by NMBS commercial director, Andy Hextall, who announced the charity prize draw sponsored by Makita in aid of the Rainy Day Trust and CRASH, offering the chance to win a bundle of Apple products worth £1000; Raising £5,692 for the two charities with the eventual winner emerging as Mark Smith from NMBS member, Grant & Stone.

The evening also featured the silent charity auction of a ScrewsArt™ portrait depicting Princess Leia from Star Wars. The portrait had been donated by ForgeFix and was created using over 5000 ForgeFast woodscrews. It was bought by Callum Kegg from NMBS member, Toolstop, successfully raising over £500 for CRASH.

Following the evening’s three-course meal, guests were treated to after dinner entertainment in the form of a unique version of BBC television’s ‘Live at the Apollo’, dubbed ‘Live at the Ricoh’, which saw Ian Moore acting as host to stand-up comedians Josh Daniels and Geoff Norcott.

Commenting on the 2018 NMBS Gala Dinner, Hayward said: “True to tradition, this year’s NMBS Gala Dinner proved to be an enjoyable and entertaining occasion which mixed business with pleasure. I would like to thank all those who supported the event, either as a sponsor or by attending, as well as the NMBS events and marketing teams for their hard work and for a job very well done.”

I'm the Assistant Editor on BMJ. If you have any product or people information, or some news you'd like to share, please feel free to email me.
Previous Black Millwork’s new range of modern garage doors
Next Thanksgiving Service for John Ward