NMBS has marked the 50th anniversary of its annual exhibition in truly spectacular style.

The UK’s largest buying society for independent builders’, plumbing and heating, timber, and hardware merchants held its 2018 event on Wednesday 11th April at the Ricoh Arena, Coventry and enjoyed record-breaking levels of success.

The show attracted the highest number of registered visitors in its half century history with over 1,000 member attendees.

It also saw the highest number of different exhibitors to date.

In total, 280 NMBS suppliers, covering every conceivable product category and type, appeared across 360 stands, located both inside the main exhibition hall and in the Ricoh Arena’s foyer.

NMBS is still processing orders from the show but also fully expects the value of business done on the day to reach an all-time high.

Chris Hayward, managing director at NMBS, comments: “The very first NMBS Exhibition was held at the Pennine Hotel in Derby in 1968 and ever since it has continued to go from strength to strength. Today, there’s no doubt that the show has become the biggest and best trading event in the independent merchants’ calendar. The attendance figures, number of stands and sheer volume of transactions at the 2018 event clearly reflects that.”

Keen to make the most of the exhibition and its popularity with the independent merchanting sector, all of the exhibitors were running special promotions and deals.

Combined with other initiatives aimed at stimulating trading, such as spot buy deals and the NMBS Voucher book, these offers enabled visiting merchants to make significant, cumulative savings on orders equating to £1,000s.

Many exhibitors had also taken innovative steps to encourage footfall onto their stands.

This included ArtificialGrass.com, who used a boxing machine to run a competition to see who had the hardest punch, OX, who had a pair of football freestylers on hand, and Forterra, who offered visitors the chance to have a caricature drawn by their own on-stand artist.

NMBS’ award for ‘Stand of the Year’ went to power tool manufacturer, Milwaukee.

Concluding, Hayward adds: “It’s perhaps befitting that the show which coincided with the half centenary of the NMBS Exhibition proved to be our busiest to date. 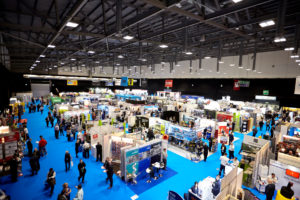 I would like to thank everyone who visited or exhibited as well as all the NMBS team involved in staging and supporting such a major and successful event.”

I'm the Assistant Editor on BMJ. If you have any product or people information, or some news you'd like to share, please feel free to email me.
Previous Flamco announces distribution partnership with Mark Vitow in UK
Next Harmer Building Drainage welcomes new ASM