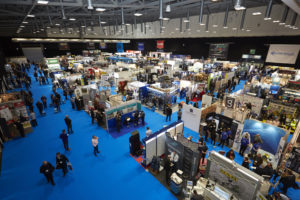 The 2019 NMBS Exhibition was the biggest event of its kind to date, organised by the UK’s largest buying society for independent builders’, timber, plumbing and heating, and hardware merchants.

The Exhibition, which took place on Wednesday 10th April, enjoyed record attendance levels as more than 300 exhibitors and over 1,000 delegates headed to Coventry’s Ricoh Arena to network and take advantage of exclusive show deals and rebates.

The aisles of Ericsson Hall were busy all day on Wednesday 10th April, as key decision makers from across the independent merchant sector made the most of the number one buying and selling event.

Exhibitors were offering merchants special deals, free gifts and exhibition rebate, with independent merchant members keen to make the most of the fantastic deals on offer.

This extra rebate is over and above the existing benefits available to NMBS members, and will continue to be offered through the whole of April for any members who attended the exhibition and placed orders with suppliers – generating significant profit opportunities.

Visitors were able to see the latest products and services all under one roof, with many exhibitors choosing the NMBS Exhibition as the venue to introduce their new ranges. There were also some great practical demonstrations for merchants to enjoy.

A highlight of the show was the Artificial Grass.com stand, where former England footballer Emile Heskey was on hand to give away signed footballs and take selfies with the football fans among the crowd.

The 2019 Stand of the Year Award was won by Toolbank who showcased their branded tool merchandising options.

The Exhibition was the highlight of a fantastic two days for NMBS, which also held its annual Gala Dinner at the Ricoh Arena the previous evening. Over 600 people attended the Dinner, enjoying a sumptuous three-course meal and a great night of socialising and networking.

The special guest at the dinner was ex-footballer, football manager and current King of the Jungle Harry Redknapp. A huge hit with the audience, Redknapp mingled and took hundreds of selfies with delegates before taking to the stage to regale a spellbound audience with funny stories and anecdotes from his fascinating 50+ year career in football.

Chris Hayward, Managing Director of NMBS, said: “I am delighted that this year’s NMBS Exhibition has built on the success of the previous years, with record numbers of visitors and a great number of deals done on the day. The Exhibition has again proven itself as the key, unmissable trading event for the independent merchant sector. We’d like to thank all the merchants and suppliers who attended and helped to make the day such a resounding success – we couldn’t have done it without you.

“I’d also like to say a personal thank you to the entire NMBS team, who have worked tirelessly to stage the Exhibition. It’s a huge undertaking every year and I’m proud to say they have excelled themselves once again.”

For more information about NMBS and how to become a member, visit www.nmbs.co.uk.

I'm the Assistant Editor on BMJ. If you have any product or people information, or some news you'd like to share, please feel free to email me.
Previous New production line adds capacity to W.Howard
Next Viessmann and the Heat for Good team delivers rugby club makeover With temperatures rising, roofing systems manufacturer Marley has launched its ‘Safe in the Sun’ campaign for …