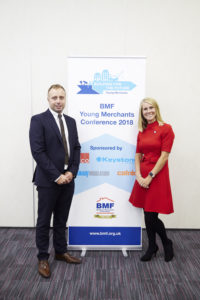 Glenn Paddison, Branch Director at MKM Building Supplies is the new Chair of the Builders’ Merchants Federation’s Young Merchant Group.  He will be supported by Jo Callow, Merchant Sales Support Manager at Knauf Insulation, who was elected to replace Paddison as the Vice Chair.

Paddison takes over from Victoria Fiddies of Catnic who has just completed her two-year term as Chair.

Paddison and Callow took up their new roles following the BMF Young Merchant Group’s first Conference which was held at the NEC during National Construction Week in October.

The Conference, organised as part of the BMF’s Anniversary Year, was a great success, attracting 150 delegates drawn from current, past and potential Young Merchant Group members.  Highlights included keynote speaker George Clarke, the architect, television presenter and campaigner, who not only spoke passionately on the need to attract more young people into the whole construction industry including the building materials sector, but also voiced some ingenious ideas to help overcome the country’s housing shortage.

Membership of the BMF Young Merchant Group is open to merchants and suppliers aged between 21 and 40 holding a key management position within their organisation.  The Group meets twice a year in the autumn and spring, and also organises an annual trip overseas.

Paddison and Callow are keen to continue developing the BMF Young Merchant’s work and influence.

Paddison said: “I am honoured to have the opportunity to take on the role of Chair and would like to thank everyone who voted for me as well as MKM Building Supplies for supporting me in taking up this role. I would also like to thank Victoria Fiddies for her excellent leadership during the last two years.  I’m looking forward to working with Jo to broaden the Group’s scope even further.  I believe there is more to achieve through the BMF Ambassador programme to promote careers in our industry to school and college leavers and this group is in a great position to take a leading role in that.  I can also see an opportunity to strengthen our ties with European merchants to learn from their experiences and share best practice, perhaps in the form of a European Conference.”

Commenting on her appointment as Vice Chair, Callow, said: “I’ve been a passionate and committed member of the group for five years and the interaction has definitely helped me as I’ve progressed my career.  As a keen advocate for women in our industry, I’m delighted that I will be continuing the strong and encouraging female presence following Vic’s term of office and look forward to working with Glenn to take forward the baton to continue to grow the group and deliver quality events.”

Callow was also pleased to announce that Knauf Insulation will host the BMF Young Merchant overseas trip in 2019, which will tour the company’s manufacturing facility in Toulouse as well as visiting French builders’ merchants.

I'm the Assistant Editor on BMJ. If you have any product or people information, or some news you'd like to share, please feel free to email me.
Previous The new mark of quality for customers
Next Ibstock Brick makes Mission Possible pledge

When the going gets tough, the tough get going