Moores has announced that Richard Bywater has been promoted to Head of Supply Chain. Previously, Procurement Manager, Richard will still be based in the company’s West Yorkshire-based head office in Wetherby and will report into David Richardson, CFO.

Bywater’s career at Moores spans 25 years and he first joined the company in 1993 as a Temp in Assembly. Since then he has undertaken several roles at Moores and within MASCO group (the parent company of Moores until its MBO in 2017) in Quality Assurance, procurement and vendor relations. After leaving Moores in 2007, Bywater worked in a variety of roles including Supply Chain, Consultancy and Sales prior to re-joining the Moores team in 2015. 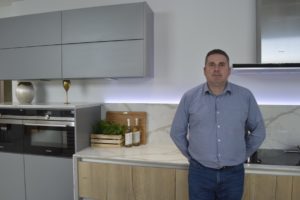 says: “I am delighted to be given the responsibility for shaping the direction of Moores’ Supply Chain and look forward to working closely with the already strong supplier base we have in place.”

I'm the Assistant Editor on BMJ. If you have any product or people information, or some news you'd like to share, please feel free to email me.
Previous First Minister Opens New Large Campus
Next MAKITA’S JOB SITE SPEAKER WITH BLUETOOTH