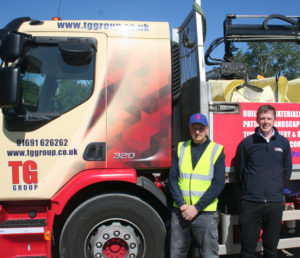 Matt Peate has worked in the builders’ merchants sector for 14 years with roles at several local companies in branches in Welshpool, Newtown and across north Wales .He won the Branch of the Year award at his previous post in Newtown.

“I’m looking forward to my new adventure with the Tudor Griffiths Group, and I’m excited about the opportunities and possibilities that lie ahead,” he said.

Peate is joined by new yard man Brian Hadfield, who initially began his career as an HGV delivery driver before he moved into merchanting with a local company. He was also a member of the award-winning team that took the regional branch of the year title.

Hadfield said: ““It’s great to be part of the Tudor Griffiths team, and I’m very happy to be working at this friendly firm that has such a close-knit team.”

TG Builders’ Merchants in Welshpool is on a one-acre site and has a 3,000 sq ft self-selection showroom as well as dry store facilities.

Group Managing Editor across the BMJ portfolio.
Previous London Reclaimed Bricks in Ryder Cup promotion
Next Are you ready to take on Alan’s Challenge?