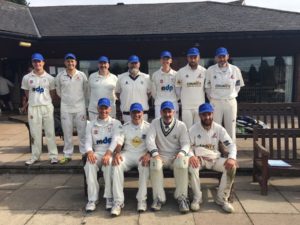 National Buying Group (NBG) has raised £2,500 for Leamington Cricket Club’s junior team, at an annual charity event that took place last month. This year the partners dominated the cricket pitch, stealing the trophy from the team of suppliers, who had previously retained the winning title for the past three years.

The event saw NBG partners go head to head with suppliers, raising money for new nets and additional equipment for the club, after doubling its number of players in the last two years.

John Dibble, Managing Director at Building & Plumbing Supplies Ltd, headed up the partners team. He said: “There was a great turn out for the event and it was a very closely run competition between the partners and suppliers. This year, the partners found their competitive streak, meaning the game was finely balanced until the last over. Luckily for the partners, we secured victory and were presented with the cup for 2018. No doubt next year will be even more competitive!

“We are always thrilled to take part in events like this, it’s a great opportunity to get our partners and suppliers together, whilst raising money for a great cause.”

The victorious NBG team was made up of partners from BPS, Browns, County Building Supplies, Huws Forest and Interline, with Neil Robinson’s son making a great impact as a young quick bowler..

I'm the Assistant Editor on BMJ. If you have any product or people information, or some news you'd like to share, please feel free to email me.
Previous Versatile low mod construction sealant from tremco illbruck
Next NBG Partners celebrate growth