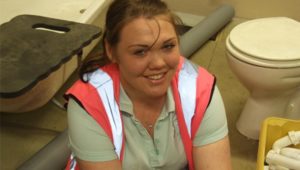 Following a scrupulous judging panel and public vote, the ‘Apprentice of the Month’ awards has announced its first monthly winner.

Lauren Winter, an apprentice at Coventry College studying Level 2 Plumbing and Heating, was announced as the ‘Apprentice of the Month’ winner for July via the awards social media channels. Lauren received top feedback from judges and secured hundreds of votes to see her take the title.

The ‘Apprentice of the Month’ awards aims to champion the great work apprentices do on a daily basis and encourage young people to be proud of the industry they work in. When asked about what the award win meant to her, Winter said: “Winning Apprentice Of The Month means a great deal to me as it encompasses everything I stand for. The realisation of the amount of support I have came to light when I saw the quantity of likes and shares that my shortlist post had received on both Twitter and Facebook.  It was also very encouraging to have had my entry judged by some of the top manufacturers in the industry. 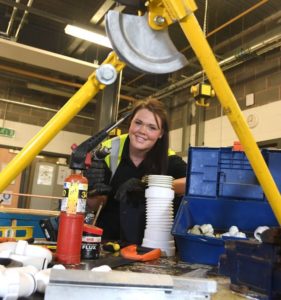 “To me, it feels great that people within the plumbing world have read about my work in the industry and acknowledged me for what I do, which is a great honour. I work hard at always learning, and if I’m not doing practical work in the day I’ve got my head in my water regs book or my plumbing books to expand my knowledge. It’s just nice to see it all pay off in the end.”

The ‘Apprentice of the Month’ was established by the industry famous ‘Heating Installer Awards’ after significant demand from apprentices for a simple awards scheme that acknowledged those still in training. The awards is open to apprentices at any stage of their training and is sponsored by Polypipe, Sentinel, Vaillant UK and Wolseley. The judging process to decide each month’s winner is an equal split between individual judges’ feedback, and a public vote.

To be considered for next month’s award, plumbing and heating apprentices should visit the ‘Apprentice of the Month’ website and fill out the entry form, where they can also view full terms and conditions.

I'm the Assistant Editor on BMJ. If you have any product or people information, or some news you'd like to share, please feel free to email me.
Previous Construction begins to catch-up
Next It’s Time to Gear Up for Changeable Weather with Snickers Workwear.

Findings have been published in a new report, Builders Merchants Share Top Predictions for 2022, …