Derby independent builders merchant Browns, played host to its local MP Chris Williamson, who visited the company to learn about how it has invested in the business to open a second branch. 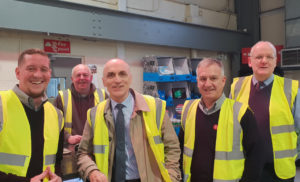 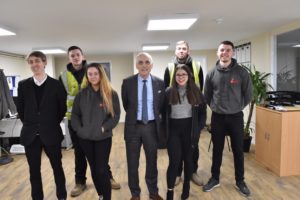 The relocation of their heavyside operation to new premises means Browns has improved its Old Nottingham Road branch to expand the range of plumbing and heating, bathrooms, and fencing and landscape products.

Williamson was welcomed by Jim Parlato, Browns’ director as part of a series of meetings organised by the Builders Merchants Federation to highlight the industry to MPs. Both Browns Builders Merchants and the BMF want more done to ‘change the ratio’ between the small number of large builders and the large number of small builders to foster a diverse, functioning housebuilding market. Part of the message that Williamson received was that unrelenting determination by national government and by local authorities is required to narrow the gap between housing demand and supply. And the number of small firms involved must increase if the drive to build more homes in the East Midlands is to succeed.

Official figures show the East Midlands has relied on changes of use in existing buildings to increase housing. Derby and Nottingham are cities where between 30% and 55% of new homes last year were in buildings that had a previous purpose. According to Mr Parlato, encouraging SMEs into the market to build small projects, in many locations, is vital to boost housing numbers.

After visiting the new branch, Williamson, who is MP for Derby North said: “I was delighted to visit Browns and it’s great to see a long-standing Derby business flourishing. I pay tribute to branch manager, Lea Armstrong, and the team in opening a new branch. Better quality and more affordable housing is urgently needed to improve constituents’ lives. As a former bricklayer myself, I know merchants play a vital role in housebuilding and especially the repair, maintenance and improvement market. I wish them continued success in the coming years”.

Parlato added: “We were pleased to welcome Chris Williamson and show him how Browns has evolved over a hundred and fifty years. We have chosen to invest and expand our business by opening a second branch to give better service to our trade and retail customers. It is great to have our MP take an interest in Browns and I hope Chris can help to raise the profile of merchants like us in Parliament”.

This visit was another arranged by the BMF as part of its industry and parliament programme. The aim is to show MPs how trade essentials and value-added products move from quarries, brickworks, sawmills, and factories to where they are needed – and to outline the role, value and importance of merchants in delivering for their communities.

I'm the Assistant Editor on BMJ. If you have any product or people information, or some news you'd like to share, please feel free to email me.
Previous BMCo set sights on Goole
Next BMI sponsors new Young Roofer category in UK Roofing Awards 2019