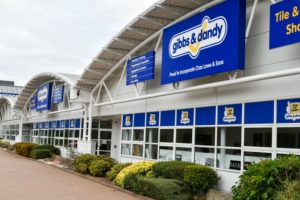 A Stevenage builder’s merchant is celebrating its first year anniversary after a turn around in fortunes that saw the business rescued from the threat of closure.

Just over a year ago Knebworth based Chas Lowe & Sons – a long established local business – and its staff were facing an uncertain future following the decision by its owners to sell the site it operated from for redevelopment.

However things took a turn for the better when builders merchant Gibbs & Dandy stepped in to save both the business and the employee’s jobs.

Gibbs & Dandy agreed to take over the business assets of Chas Lowe & Sons and relocate it from Knebworth to a new site at Gunnels Wood Park in Stevenage.

Since the acquisition, the branch has gone from strength to strength, with a successful and profitable twelve months resulting in the branch now looking forward to a bright future.

Stuart Wells, Stevenage Branch Manager, said: “It’s been a very successful first year. The staff have enjoyed working together as a team rather than as individual departments, and having clear procedures in place has helped everyone.

“It’s been great to see how much the staff have taken pride in seeing the branch grow and grow during the past 12 months.

“Similarly, the customers have appreciated the opportunity to deal with staff with whom they are familiar and also have enjoyed the store’s new location and the access it provides including customer friendly parking.

“All these factors have contributed greatly to the branches success.”

As part of the branch’s commitment to reaching out to Chas Lowe customers is a new and improved product range which covers all bases for trade professionals and home DIYers alike.

This has including everything from bricks, blocks and timber to paint and household tools and a new internal timber warehouse to meet the demand for such products.

The opening of the new Stevenage branch last year proved an ambitious project in itself involving a whirlwind 30 day turnaround in which all the staff team were involved.

The challenges faced including transferring all stock to the new location, installing a new IT system, staff transferring to a new town and undergoing training and opening a new bathroom showroom, plus fitting and installing several displays.

Stuart Wells, adds: “It was a ridiculously ambitious timeline we had set ourselves – a four-week turnaround from the announcement to opening the new Stevenage branch, and in that time we had to move stock, train staff and set the new branch up.

“The installation of the new IT system was particularly tough, especially for the first few weeks when there had only been limited training but everyone worked hard and pulled together.

“In fact the staff and how everyone worked together got us all through, myself included, to be where we needed to be in only 30 days. It was possible thanks to a positive team with a real “can-do” attitude”.

Stuart adds: “All our hard work has certainly paid off, with the branch performing well since launch with former customers returning and new ones coming on board.

“We look forward to the branch’s continued growth as we move into our second year and beyond.”

For more information on the Stevenage branch visit:

I'm the Assistant Editor on BMJ. If you have any product or people information, or some news you'd like to share, please feel free to email me.
Previous ‘Owl look after you’, say Selco staff
Next Cheshire Mouldings extends timber internal door range