Marathon runner raises £28,000 for charity in memory of his dad

A man who lost his father to cancer has raised an incredible £28,000 in his memory for The Prostate Cancer Research Centre, surpassing his target amount of £26,000, after successfully completing the Virgin London Marathon for a second consecutive year.

Aaron McSkimming, from AD Bly Construction, completed the colossal course in five hours and 16 minutes. Running alongside him were his cousin, Kevin McSkimming, and colleague, Marc Hilton. All of them were supported and cheered on by long-standing supplier – groundworks and materials specialist, Rudridge.

After his father tragically passed away in August 2015 following a two-year battle with the disease, Aaron felt compelled to do something to help raise awareness of the deadly illness. He heroically completed his first marathon in 2017 raising more than £26,500 in the process meaning he has raised an astounding £28,000 for the charity to date.

McSkimming commented, “I had no idea until my father went through his battle with prostate cancer how common the disease is, or how it could even affect us. It causes a great deal of pain, removing a man’s dignity and independence. It’s an awful experience, not just for the person going through it, but also for their close family and friends who have to witness their suffering. After running last year’s marathon I was determined to repeat the task. This year was tough, despite my previous experience, but having my running mates alongside me and support from Rudridge made it so much easier.”

Darren Price, Group Operations Manager at Rudridge, added, “Huge congratulations to Aaron, Kevin and Marc on their epic achievement. We are so proud of them and everything they have done to raise vital awareness and funds for such an important cause. They are truly incredible.”

All funds raised by Aaron 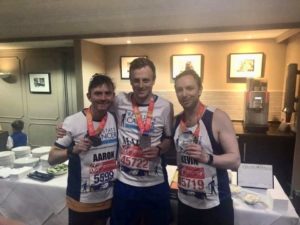 , Kevin and Marc will go to The Prostate Cancer Research Centre. To find out more, visit www.prostate-cancer-research.org.uk/.

I'm the Assistant Editor on BMJ. If you have any product or people information, or some news you'd like to share, please feel free to email me.
Previous Housing Secretary backs new wave of builders merchant apprentices to deliver housing growth
Next St Albans Next Stop for Expanding Builders Merchant