bricks from London Reclaimed Brick Merchants’ appeared this week in a promotional video ahead of the prestigious Ryder Cup international golfing tournament.

LRBM supplied the official Ryder Cup video producers with 160 Plain Gault bricks which were used to support four canvases that revealed portraits of each of Team Europe’s wildcard players. 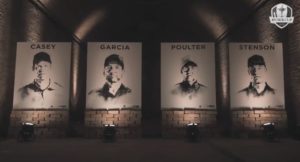 The video was an instant hit, gaining over 1000 likes and almost 500 retweets just hours after its release by Team Europe’s official Twitter account.