It all seems so easy when you are a child, playing with your wooden Thomas the Tank engine train layout. Train leaves station, runs round living room. Stops at Sofa Junction to pick up passengers, over the viaduct by the hearth then back again, via Coffee Table Halt.

I get that Govia Thameslink, for example, have a rather wider network to cover than my living room carpet and that they carry a million plus passengers a year rather than the random collection of Playmobil people, soft toys and toy cars that my children used to, but surely it shouldn’t be as hard a job as they are making it.

I travel regularly on Southeastern (having been very bad in a previous existence, this is my punishment) and for months prior to the May timetable changes they were issuing leaflets, emails and announcements highlighting the new times and that passengers should make themselves aware of the changes to come.

So, it’s not like this should have come as any great surprise to any of the operating companies either. I mean, it’s THEIR timetable that THEY are changing. And yet both Northern and Govia Thameslink have announced ‘emergency timetables’ with the former cancelling 165 train services until the end of July, so that the actual trains that run bear some sort of relationship to those that are timetabled.

How is it possible that a business can run things so badly? I understand that operating a rail franchise is a more complicated things than I probably realise, but still, there are plenty of businesses out there doing hugely important, complicated jobs without making quite such a pigs-ear of it.

Of course Northern and Govia Thameslink (not the only ones to mess up, but let’s not even go anywhere near the diabolical man-management mess that Southern and the RMT between them inflicted on their passengers last year) have their excuses at the ready. There’s “a lack of trained train drivers” who haven’t quite had time to get used to new routes and the new electrified trains. Plus, Network Rail has been delayed in its planned electrifications so electric trains were not running on certain lines when the timetable overhaul happened. According to the company, drivers who had been trained to run the new timetables using electric trains are now having to be re-trained to do so using existing diesel stock, because some services have changed and additional stops have been added. Also, there are different depots to get used to and different types of train.

Not sure I understand quite why the route changes are so complicated. It’s not like we are talking about the Guildford one-way system: surely a train can only go where there are tracks, but I guess it is a bit more complicated than that.

We are ploughing up thousands of acres of this green and pleasant land in order to build HS2 – whether it is needed or not – yet the ridiculous policy of separating the ownership and control of the services and the infrastructure means we can’t even operate what we already have. Its ridiculous and it needs sorting out. If we want to get more people out of their cars and off the roads – and we do – we need proper, grown-up, integrated transport policy and train that run, preferably on time.

The last, best, final word on this I will leave to the Telegraph’s incomparable cartoonist Matt Pritchard. He is, as ever, absolutely spot on. 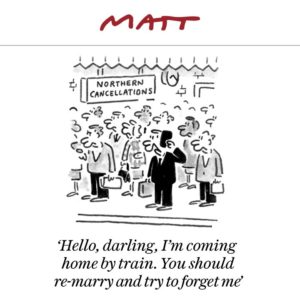 We won then. We will win again here May 9, Victory in Europe Day, was …