In a late change to the speaker line-up for .the BMF Members’ Day Business Conference tomorrow (September 27), the Builders Merchants Federation has secured England international Jill Scott to replace fellow Lioness Laura Bassett, who has had to withdraw for family reasons. 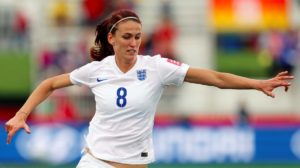 Scott, an energetic, ball winning midfielder, is one of England’s most outstanding players scoring 21 goals in 130 appearances.  Her experience on the field helped England to qualify for next year’s World Cup finals.  She has played in two previous world cup tournaments as well as the 2012 Olympics.

Her career began at Sunderland, her home town club, before joining Everton in 2006 where she contributed to the Blue’s FA Women’s Premier League Cup success in 2008 and FA Women’s Cup in 2010. Following a move to Manchester City she helped secure the Continental Cup Trophy in 2014.  During her stellar career Jill has been voted 2008 FA Player’s Player of the Year and 2011 FA International Player of the Year.

The theme of BMF Members’ Day Annual Conference & Awards 2018 is “The Future belongs to the Bold”.

The Business Conference and the BMF’s black-tie Awards Dinner, which celebrates the achievements of young people working in the industry, both take place on 27th September at the FA’s national football centre, St George’s Park.  The BMF’s annual Golf Tournament and other social activities will be held on the previous day, 26th September.

I'm the Assistant Editor on BMJ. If you have any product or people information, or some news you'd like to share, please feel free to email me.
Previous Keyline appoints new Business Development Manager
Next Johnstone’s Trade launches Stainaway