Kerridge Commercial Systems (KCS), a leading software provider to the merchant, timber and wholesaler industries, and a company that is undergoing a phase of substantial growth, has appointed Chris Owen in the new role of Chief Support Officer. Chris joins from JDA Software, a multinational company where, as Head of Global Delivery in Customer Success, he was directly responsible for the provision of Customer Services (Support & Cloud) to all of JDA’s customers globally.

At KCS, Owen’s goal is to create a leading support organisation by taking current best practices from industry and applying them to what is already a good support structure.   He said, “The way you care for customers is evolving, with traditional methods being replaced by modern techniques and tools.  For example, I’ll be looking to develop a knowledge base where customers with more common problems can self serve on a 24/7 basis rather than waiting until a support analyst becomes available in office hours. Where further work is required we’ll be working more effectively to identify what we need to do to provide immediate help, as well as what we can do long term to prevent a problem happening again.”

KCS already employs around 200 people globally in a support capacity, mainly at the company’s Berkshire HQ, as well as in Gateshead, South Africa and the US. Owen said he would be adding people to the team, investing in training and adding new processes, policies and procedures. “We’ll also be sending key support leaders on the SGSA Support Manager Certification Programme to ensure we pick up the latest thinking among support managers,” he said. 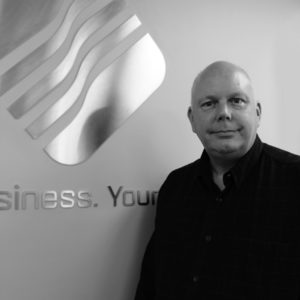 was with JDA for 20 years. Prior to this, he was part of the team at Homebase that introduced the first loyalty card in the UK. Before that he worked for Sainsbury’s where he was heavily involved in implementing barcode scanning.

Plymouth-born Chris is a Chartered IT Professional and a Fellow of the Chartered Management Institute.  He is a qualified private pilot and, in recognition of the supervisory roles he has played at the Lord Mayor’s Show, has been made a Freeman of the City of London.

I'm the Assistant Editor on BMJ. If you have any product or people information, or some news you'd like to share, please feel free to email me.
Previous Drove to the Levy but the Levy was dry
Next Cistermiser and Keraflo new National Sales Manager

Why should Builders Merchants and other distributors make a digital transformation?