At the end of July this year, the team of Broke.Bike.Mountain set off on an epic 8,000km journey across Europe with just their bikes!

The team then consisted of Louis Blaxill, George Jones and Calum Craig, all aged 23 and who had just finished their studies and wanted to raise money for Mind, a charity close to all their hearts.

The team left the UK and headed off through France, Holland, Germany, Czech Republic, Slovakia, Croatia, Italy, Austria and Spain 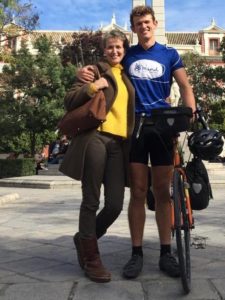 Louis Blaxill said, “It’s been really tough, and we’ve suffered injuries and accidents including George being knocked off his bike in an accident with a car in Verona which was really frightening, and Calum injured his knee which left me cycling alone.”

He continued, “Fortunately, my father, Simon Blaxill joined me to keep my morale high and we complete the ride in Seville this weekend after 4 months – but to keep the family support going, I challenged my mother, Jill, to join us and jump out of a plane.  Luckily, she agreed and we hope her colleagues at Kent Blaxill plus friends and family will sponsor her in order to take the final total as high as possible – it’s already over £6,000 for MIND.”

Jill Blaxill said, “Whilst I really can’t  say I’m wasn’t a little apprehensive, I’m so proud of the boys and I wanted to help them raise as much as possible – this seemed like a good idea when my son Louis challenged me and I really enjoyed the whole experience!”

Jill Blaxill is married to Managing Director of Kent Blaxill, Simon Blaxill as well as a member of the Kent Blaxill team at Colchester.  Simon Blaxill said, “I am so proud of the boys – but I am equally proud of Jill for her bravery and I really hope the jump helps push up the total figure raised for MIND – I am sure many friends and colleagues will support her.”

I'm the Assistant Editor on BMJ. If you have any product or people information, or some news you'd like to share, please feel free to email me.
Previous New Handleless Design for JP Distribution
Next Specialist Engineering Contractors’ (SEC) Group celebrates its 25th anniversary