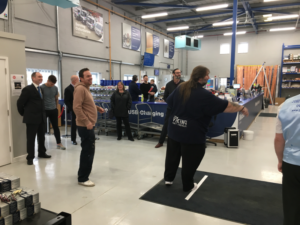 Several people from the local darts community in Oxfordshire also came to take on the 2004 World Champion, with one participant commenting “it’s not every day you get to challenge a World Champion and someone you have watched on TV for many years.

Customrs Will Cook and Ernie Aris were the only ones who beat Fordham with an outshot of 16 and 8 respectively.

The event raised nearly £300 for Sport Relief, with over £500 throughout the week raised across all the branches.

Andrew Nicholls, CEO of John Nicholls (Trading) Ltd said “We’re thrilled to be raising money for Sport Relief; it’s a fantastic charity that really makes a positive contribution to the lives of vulnerable people within the UK and the world. It’s been great to see so many customers and staff get involved with our darts challenge and we’re confident that we will raise a significant amount for Sport Relief”.