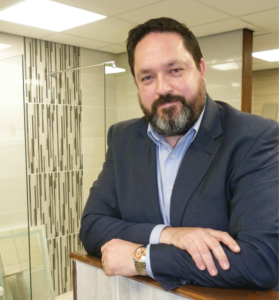 Coughtrey joins in the new role of area manager (south) with a brief to encourage further growth.

The company began ia move out of its northern heartland in  2015, opening a branch in Milton Keynes. Success there has since led to a significant presence in both Daventry and Northampton and now the company is spreading into other regions, notably Staffordshire, with new branches in Cannock and Lichfield.

“The aim is to keep adding branches to the portfolio and that is what makes this new challenge so exciting for me,” said Coughtrey, who started his career on the trade counter of his local store in Tonbridge. He later moved into sales before becoming a branch manager (Lewisham) and went on to achieve a national management post, overseeing 50 branches.

“I have experienced most of what this industry can throw at you – particularly in terms of multiple-site management – and feel confident in my ability to help James Hargreaves Plumbing Depot climb even higher on the national ladder.

“The company’s commitment to service is the key; there is a solid, honest approach to everything they do and that is reflected across the staff and the customers. People know where they stand, what they can expect and, in terms of stock and service, that offering is second to none.”

Bill Davies, sales director at James Hargreaves Plumbing Depot, said: “No matter how far we expand (geographically) and how big we become (number of branches), finding high-calibre people is critical to our development. That philosophy has served us exceptionally well down the years and, in Russell, we have found someone with a great pedigree. He knows the business, has managed at the top level and is someone we feel will help us move forward with vigour and confidence.”