Littlehampton-based independent plumbing and heating merchants buying group The IPG has been recognised by Arun District Council as 2018’s Business of the Year (10 or more employees). 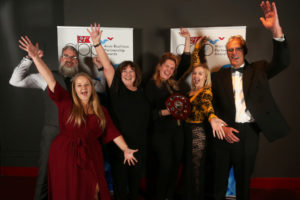 The 21st Arun Business Partnership Awards ceremony took place on the 15th November and saw several local businesses compete across the various categories. The Partnership has over 2,000-member companies who generate business and employment in and around Bognor Regis, Littlehampton, Arundel and the wider Arun area.

The IPG membership of independent plumbing, heating and bathroom specialists recently celebrated a double-digit year-on-year growth since June 2017. Over the past five years the company has grown to over 200-member locations nationwide, with an impressive list of 90+ suppliers.

The IPG was also praised for the time and effort it has put towards giving back to local communities across the country, most notably its recent partnership with Missing People, which see IPG members joining the ongoing battle locating missing children across the UK.

The group was also recognised for the work it does for its members’ customers. Most recently, it undertook a study looking into the long-term physical effects that plumbing can have on plumber’s knees.

Upon receiving the award, marketing manager Nike Lovell said; “We are delighted that the work The IPG has done for local independent companies across the country has been recognised by this award.

“However, we believe we are only as strong as our members, so this award is as much for those independent merchants as it is for us and we hope they are as proud of this win as we are.”

E Tupling, the heating and plumbing distributor to independent builders and plumbers merchants, has invested …